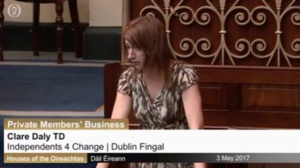 Sinn Féin’s motion to ensure the new National Maternity Hospital has “legally-guaranteed independence” from all non-medical influence in its clinical operations was carried.

During a debate on the motion, Independents 4 Change TD Clare Daly spoke about maternal deaths in Ireland, and the lack of inquests for the same.

“Regardless of the justifiable public outcry over the handling of the new national maternity hospital and the prospective ownership of that facility being given to a religious order, this motion is incredibly timely. There is no doubt that our maternity services are in desperate need of reform. It is something that we need to discuss. The best response that the Government can come up with is that we compare favourably to other countries. Do we, and if so, which countries? I would not like to be compared to them.

Let us look at some of the facts. Between 2011 and 2013 there were 27 maternal deaths. These were otherwise healthy women who went in and lost their lives in childbirth or shortly afterwards. There were inquests in only three of those cases.

In 2014, there were 365 reported cases of severe maternal morbidity, but our data is incomplete because not all of the maternity hospitals participated in that.

Between 2007 and 2015 the HSE incurred a staggering €66million in legal fees arising from maternity cases involving serious injury or death to women or babies. During the same period the HSE, through the State claims agency, paid out an even more staggering €282 million in damages in maternity cases. That is 116 times more paid out in legal settlements and fees than the extra €3 million that is being given to the new national maternity strategy. Unless that culture of litigation, denial, lack of accountability and lack of oversight is dealt with our problems will continue.

There is no doubt that one of the key reasons for our problems is the significant under-staffing level of midwives and doctors across the State. Meanwhile, reports and reviews into adverse incidents are either not made available publically or they are badly delayed. The review of adverse incidents in Portiuncula hospital, for example, was supposed to be available by mid-2015. We still do not have it.

We did discover last week, however, that the hospital was carrying out a secretive review of care, with a doctor even ignoring advice and saying that he did not see the reason why there should be any review at all. We have to deal with these issues, because our maternity services are consistently running at sub-optimal levels, which is undoubtedly leading to trauma for women and their families and to catastrophic outcomes because of the lack of accountability and the completely inadequate and non-binding HSE open disclosure policy.

What we need is a statutory duty of candour in order to deal with these cases. It is more than urgent. It is one of the reasons why I moved the Coroners Bill 2015 and why that is so critically needed, yet we still do not know whether the Government has passed a money message even though the Committee for Justice agreed more than six months ago that it would go to committee stage next week.

We need accountability and openness if our services are going to improve. The widowers who lost their wives and the mothers of their children can testify to the failures of our maternity services and the need to change.

We know from the eight inquests held between 2007 and 2015 into the deaths of women in our maternity services that vital information was withheld. They were often not privy to internal investigations and reports until the HSE was ordered to produce them in public hearings by the Coroner’s offices.

Although hospitals and the HSE indicated that they would change procedures and protocols, those were not implemented and carried through. That is utterly devastating for those families.

It is not an exaggeration to say that if the HSE recommendations issued on foot of the tragic death and inquest into the death of Tanya McCabe had been made enforceable national policy then Savita Halappanavar may not have died.

If the inquest into Dhara Kivlehan’s death had not been delayed for four years – she died in 2010 and the inquest was in 2014 – then Sally Rowlette, who died in 2013 in the same hospital of the same condition, leaving four children, may not have died. These are very urgent issues that need to be addressed. It shows systemic failures and a lack of openness in our system.

We know that there are countries across the EU which have much better health outcomes than we have. We need proper audit and genuine open disclosure. We have to have automatic inquests into maternal deaths in order for maternity services to improve.

It is unforgivable that in this day and age that fetal abnormality scans are not available as a matter of course to women. The Minister has told us over and over again that all hospital groups offer such scans, but the reality is that the scans have to be implemented by doctors. Women outside of major centres have to travel, and the consequence is that abnormalities are not always picked up. It is not good enough.

I welcome the motion, but it does not go far enough. That is not a criticism, it is a point of observation. The national maternity strategy is far from flawless. The language in it is feeble. We talk about woman-led care, when there has been a deliberate decision not to have midwifery-led care because there is some seemingly mythical and highly polarised debate out there about midwifery care. I reject that. I would say that it is far more likely that expensive private obstetric practices are the ones who are worried about midwives. No one else is.

Midwifery-led care is the way forward. In Scotland, they have 18 free-standing or along side midwifery-led units serving a population the same as Ireland, yet we have two pilot schemes in Cavan and Drogheda.

There has not been a single sod turned to provide even one midwifery-led unit in Ireland, despite the national maternity strategy making promises on the issue over 14 months ago. The Scottish national maternity strategy provides that every woman will have continuity of care provided by a primary midwife who will provide the majority of her antenatal, intrapartum and postnatal care. The input of an obstetrician is an addition, but the provision of care is centred on the midwife, which is best for the State, health outcomes for women and the public purse.

The Government has one month in which to look at the maternity hospital and we will see what happens, but St. Vincent’s University Hospital was built with public money. Is it not ironic that, in 1972, Noel Browne was questioning the funnelling of public money and cash into a hospital for the Sisters of Mercy? There should be no debate on this issue. It has to be sorted out as it is a public hospital which was built with public money and should be publicly owned.

On A Clare Day

Maurice McCabe And The Plastic Rat