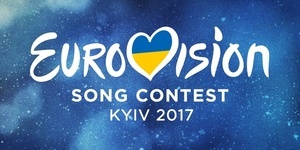 An annual event as loved as the contest itself.

Before I tackle the songs, politics as always is at the centre of Eurovision.

Russia, with its presence on Ukrainian soil (‘Crimea River’ anyone?) kicked things into gear by sending wheelchair bound singer Yulia Samoilova with what has become their usual PR tactic of sending a sickly sweet ballad, ‘Flame Is Burning‘, about love, respect and diversity all the while gay men are executed on Putin’s door step in Chechnya.

This ruffled the feathers of Ukraine, this year’s hosts, who, after winning the rights to host the contest (with the “Stalin murdered my whole family by deporting them to gulags” R&B ethnic inspired track “1944”), kicked up and told Russia that their singer was not coming anywhere near Eurovision in Kiev as she had allegedly performed in Crimea, a violation of Ukrainian law.

A compromise was reached by the organisers, the EBU to allow her to perform from Moscow by satellite but this was about as welcome as Michael Barrymore at a pool party. In the end Russia pulled out (not a fan of the withdrawal method myself) and the prosecco and poppers will duly flow in Kiev.

Song wise Italy (above) is the favourite to win this year. On the surface it’s a novelty song but drill down into the lyrics and you have a very clever rock song meditating on the West’s obsession with materialism and Oriental-inspired faux philosophy all wrapped up in social commentary about “The Naked Ape” based on the book by Desmond Morris.

The nearest contenders for the title are Portugal who voted to send Salvador Sobral with a tune inspired by 1950’s lounge music “Amar Pelos Dois”.  a song that stands out as its beauty is its simplicity in the context of glitz and glamour of Eurovision and even just chart music in general (when you have 16 Ed Sheeran songs in the Top 20 the music buying public are not really in a position to slate Eurovision ;) ) .

Belgium comes next with its electro pop inspired “City Lights” although her stage presence means she is more wooden than a set of table and chairs from Ikea. Armenia has gone with an Oriental inspired pop track.

Making up the other two favourites are Bulgaria sending singer Kristian Kostov with the song “Beautiful Mess and at 17 he appears older and next to them will be Sweden whose song “I Can’t Go On” sees treadmills and enough hair gel to resurface the entire M50 over take the stage.

Ireland has lost interest in Eurovision and, by letting Louis Walsh dictate who he wants to sing Ireland’s song and not reverting back to the process of a national selection, we are again victims of second rate bland writing (a Norwegian jury member was replaced after publicly stating this about our song Dying To Try on the Norwegian preview show!).

A number of comments have referred to the falsetto style voice of singer Brendan Murray as sounding like a “chipmunk being smashed with a hammer “and other unflattering terms. Ireland should bring back the Castlebar Song Contest.

The UK, meanwhile, has pushed the boat out this year and sent Lucie Jones, another X factor winner with “Never Give Up on You” penned by former winner Emille De Forest.

Betting wise, my advice is to back Italy to win and get Israel [with ‘I Feel Alive‘] at 10/15 depending on your bookie.

Eurovision represents a mixture of the deliriously funny and the beautiful aspects of European culture. It’s a crossroads of East and West Europe, the politics and the society that it reflects. Enjoy it whatever you opinion!!