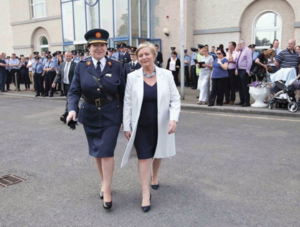 Tánaiste and Minister for Justice Frances Fitzgerald announced the 12 members of the Commission on the Future of Policing in Ireland and the final terms of reference for the commission.

It will report back to her in September 2018 but, in her announcement, Ms Fitzgerald said:

“Crucially the Commission may bring forward immediate proposals and rolling recommendations for implementation, that it considers are required to be addressed in the short-term, in advance of its final report.”

“I am determined to continue shining a light to uncover bad practices and issues that must be resolved…It is clear from recent events that systemic issues which have emerged require the establishment of this expert group on policing to report in a timely way on the further changes now necessary to meet the requirements of a modern police force.”

From the Department of Justice…

Ms Kathleen O’Toole is currently Chief of the Seattle Police Department. She held the position of Chief Inspector of the Garda Inspectorate between 2006 and 2012 prior to which she was the Commissioner of the Boston Police.

Ms Noeleen Blackwell is a human rights lawyer who is Chief Executive of the Dublin Rape Crisis Centre. She was formerly the Director General of the Free Legal Advice Centre (FLAC).

Mr Conor Brady is a former editor of the Irish Times and the Sunday Tribune and was a member of the Garda Síochána Ombudsman Commission from 2005 to 2011. He has written extensively on the history of An Garda Síochána and has served as a visiting professor at the John Jay College of Criminal Justice in New York.

Dr Johnny Connolly is Irish Research Council Enterprise Scholar at the Centre for Crime, Justice and Victim Studies at the School of Law in the University of Limerick. His research project, co-funded by the Irish Research Council and the Irish Council for Civil Liberties, is titled ‘Developing a comprehensive human rights based response to drug and gang-related crime and community violence’.

He has previously worked as a Visiting Research Fellow in the School of Social Work and Social Policy at Trinity College Dublin and as a Research Officer at the Alcohol and Drugs Research Unit of the Health Research Board. He has published widely on justice issues and is board member of the Irish Penal Reform Trust.

Dr Conway is a leading researcher on policing in Ireland with an emphasis on the intersection between social change, police culture and police accountability. She has published two monographs on policing in Ireland (The Thick Blue Wall: The Morris Tribunal and Police Accountability in the Republic of Ireland and Policing Twentieth Century Ireland: A History of an Garda Síochána), edited a book on criminal procedure and written numerous articles on policing.

Her research has been funded by the British Academy and the European Commission. She was appointed a member of the Policing Authority in December 2015. She has held visiting scholar positions in North America, Australia and Ireland. Vicky is a member of the board of the Association of Criminal Justice Research and Development and has previously been a board member of the award winning Committee on the Administration of Justice in Northern Ireland.

Tim Dalton is a retired Secretary General of the Department of Justice and Equality.

Sir Peter Fahy has served in 5 UK forces spending 5 years as Chief Constable of Cheshire and 8 as Chief Constable of Greater Manchester Police with 13,000 staff under his command. In his time as a police chief he championed Neighbourhood Policing and drove through significant change programmes.

For 8 years he was director of the Strategic Command Course at the police staff college Bramshill. He held national positions in charge of race and diversity and workforce development and was national police lead for the Prevent counter terrorism programme. He is a life member of the US Police Executives Research Forum having previously served on their board. ‎

When he left policing in November 2015 he took up a post as chief executive of the street children charity Retrak and among other responsibilities works with African police forces on how they deal with vulnerable children. He is also Chair of the Plus Dane Housing Association and a trustee of the Catholic Diocese of Salford along with a number of other trustee positions. He is an honorary professor at the University of Manchester.

Ms Tonita Murray is an international police development consultant with over 40 years as a civilian in government ministries directing the police and in the Royal Canadian Mounted Police (RCMP). She has specialised in police reform, policy development, training, leadership and management.

During her career in the RCMP she was one of the leaders of organisational change and a Director General of the Canadian Police College. From 2003 to the present, she has been engaged in police reform in Afghanistan and Kenya, including gender mainstreaming and gender sensitive policing. She has published on police management and reform, accountability and governance, women in policing and on the Afghanistan police reform effort.

Dr Antonio M. Oftelie is Executive Director, Leadership for a Networked World and Fellow, Technology and Entrepreneurship Center at Harvard. Dr Oftelie conducts research, teaches, and advises on how law, policy and technology can be aligned to create exceptional environments for organizational innovation and adaptation.

Based in the John A. Paulson School of Engineering and Applied Sciences at Harvard University, Antonio administers the Harvard Innovation Award program, is faculty lead for the Public Safety, Health and Human Services, Chief Financial Officer, Next Generation Operations, and Public Sector for the Future summits, and since 2004, has developed and taught in more than forty Harvard executive education programs.

As an application of his research, Antonio advises senior government and business executives on organizational transformation by helping them to adapt their mission and strategy, ideate new business and service models, build dynamic capacity, and create performance and value measures.

Professor Donncha O’Connell is an Established Professor of Law at the School of Law, NUI Galway where he has just completed a four year term as Head of School. He is also a Commissioner of the Law Reform Commission and was, for four years, a board member of the Legal Aid Board.

Professor O’Connell was a Visiting Senior Fellow at the Centre for the Study of Human Rights, London School of Economics in the academic year 2009-2010. From 1999-2002 he was the first full-time Director of the Irish Council for Civil Liberties (ICCL). He has also served on the boards of the following human rights NGOs: INTERIGHTS; Free Legal Advice Centres (FLAC) Ltd; and Amnesty International – Ireland.

Ms Helen Ryan was the Chief Executive Officer of Creganna-Tactx Medical from 2005 – 2013, a global supplier to the medical device industry specialising in products, technologies and solutions for minimally invasive therapies. The company is currently ranked among the world’s top 10 medical device outsource providers.

During Ms Ryan’s time as CEO, the company grew five-fold to become the largest indigenous medical device company. The expansion included three company acquisitions, a strategic joint venture in Asia, and the raising of significant debt and equity financing. The organisation grew from 100 people at a single site in Galway to over 1,250 people across a global network of four sites in Ireland, the USA and Singapore.

Prior to joining Creganna-Tactx in 2003, Ms Ryan worked with Medtronic and Tyco Healthcare (Covidien) in Product Development and R&D functional management roles. She is a fellow of the Institute of Engineers of Ireland and a member of the Boards of Enterprise Ireland and of the Galway University Foundation. She is a past Chair of the Irish Medical Devices Association, and serves as a non-executive director of a number of companies. 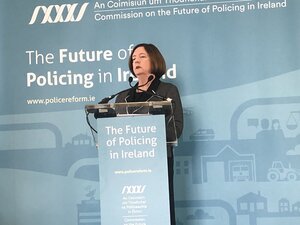 The Future Of An Garda Síochána

23 thoughts on “The Future Of An Garda Síochána”