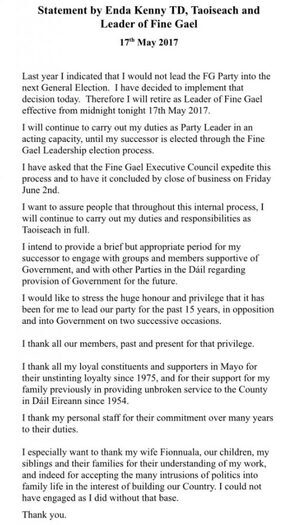 Statement from Taoiseach Enda Kenny this afternoon announcing  his resignation ‘effective from Midnight tonight’ with a competition for his successor to  conclude by Friday, June 2 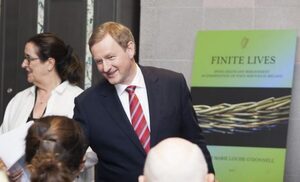 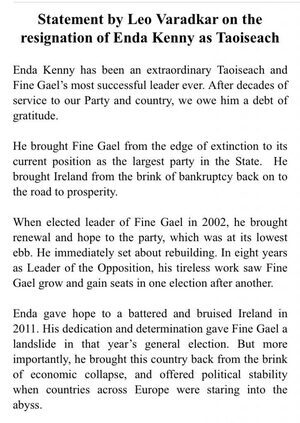 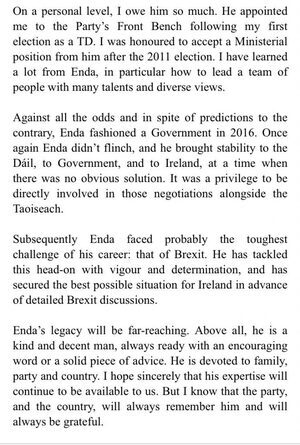 A statement released by Fine Gael TD and Minister for Social Protection Leo Varadkar  this evening.

“As leader of Fine Gael, Enda Kenny has been a towering figure in modern Irish history and will be recognised as such over the coming days, weeks, months and years. When Enda took over the leadership of our party we were broken and demoralised.

With his vision, determination, positivity and relentless work-rate, he led our party back from defeat and to sustained electoral success, culminating in victory in the 2011 General Election and a record result for our party.

I am proud to have served in Opposition and then in Government with Enda. I saw at close quarters how skilled and driven he was to succeed for our party, in Government and for our country. His record in Government since 2011 will be viewed very positively by historians, not least how he led the restoration of our economic financial independence over that period, which was a landmark event.

But it is not just these high-profile moments that I reflect on, I recall the energy and excitement of a number of elections campaigns – any day on the campaign trail with Enda was a lively one; or those early days in Government when the economy teetered on the brink and Enda’s calm and clear-headed leadership helped guide us through, or the late nights and long hours trying to construct a new coalition Government in 2016.

It has been an honour to serve with Enda Kenny for almost 20 years now and I wish him, Fionnuala, Aoibhinn, Ferdia and Naoise the very best in the future.”

A statement released by Fine Gael TD and Minister for Housing Simon Coveney this evening.