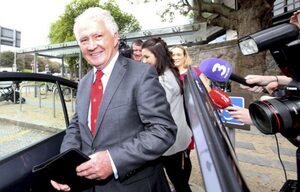 The first ever bulky report placed in my cubby hole, in the mail room of Leinster House, was from the Director of Corporate Enforcement, then Paul Appleby. It was an investigation into the activities of Ansbacher Bank (Ireland) Ltd.

Many of the details had already been leaked. The central allegations had been aired over several years. Even so the collective airing in one document of such a huge financial conspiracy, continued to shock and did nothing to alleviate public concern.

Over 200 people, supposedly prominent in Irish life were named. To be historically accurate and fair, few of these were directly involved in politics, none currently involved then. The nexus of labyrinthine financial mechanisms, created by Des Traynor, centred around the Guinness and Mahon bank and the boardroom of Cement Roadstone Holdings.

There was meant to be some satisfaction in the €120 million in unpaid taxes and fines that were collected. What never happened was any prosecution of any of the people involved.

Over the subsequent years, The Office of the Director of Corporate Enforcement, through the tenure of several directors, has tended to be underresourced. This led the office to concentrate on smaller fry, having neither the resources nor the willingness to take on the bigger offenders. In Ireland the bigger the fraud, the less the likelihood of it being identified and, as such, of it ever being prosecuted.

Like most I look askance at the verdict passed on the Seán Fitzpatrick trial. I won’t quibble with the legal technicalities, I freely admit I lack the capacity to do so. Nor will I indulge in the hang ’em, flog ’em, throw ’em in the brig (I realise the order is nonsensical. That’s the point!) cravings that we all indulge in.

Seán FItzpatrick is ethically guilty of huge breaches of trust. He moved enormous sums of money between financial institutions, aimed at protecting his acquired wealth, and to create an impression that the institutions concerned were more financially sound than was actually the case.

In doing so, he undermined the lives and livelihoods of tens of thousands. He was part of a group of a small number of people, whose actions helped put the economy of this country onto life support.

I am more saddened than angered, that these obvious wrongs cannot be legally recognised. That as a State we seem to lack the capacity, either through indifference or diffidence, to properly investigate or securely prosecute.

Our ongoing frustrations not only exonerates those who have failed us, it means we fail future generations for whom what has happened, can so easily happen again.

If it takes a new legal code, a new Constitution, or new methods to select a judiciary better grounded in moral imperatives, then we should be prepared to ask such questions. To continue to accept this form of Justice as She is Spoke, demeans us as a Republic.

73 thoughts on “Plus ça Change”