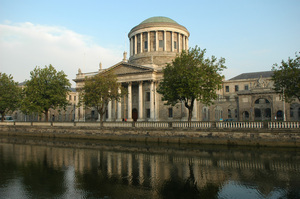 That the absolute ban prohibiting asylum seekers from work is unconstitutional.

And the court adjourning the matter for six months to allow the Oireachtas decide how to address the situation.

On the Human Rights In Ireland blog…

The ball is now firmly in the court of the Oireachtas. However, the Oireachtas must be reminded (contact your TD here), that they are not starting from a blank slate.

First, the Irish High Court has already ruled that maladministration in rendering of a lawful decision on a protection claim may result in damages being awarded to an asylum seeker. Therefore, whatever course of action the Oireachtas takes, lets get this right.

There has to be some focus on the ability of our quasi-judicial bodies who determine protection claims to do their work efficiently, but most importantly to be fair to asylum applicants.

Second, It would appear, that if Ireland became part of how European Union society deals with this question, then our Parliamentarians need to look no further than EU law for a solution to this constitutional protection of asylum seekers right to work.

The Recast Reception Directive (which Ireland is not bound by), provides asylum seekers a right to work should generally be granted after 9 months where a first instance decision has not been rendered on a refugee/protection claim. The McMahon Working Group on the Protection Process and Directive Provision made a recommendation  (para 5.49) that once the International Protection Act 2015 was operating efficiently, that Ireland abide by this 9-month rule.

Whatever the Oireachtas decide, this constitutional right of asylum seekers to have a freedom to enter employment must be effective, and not illusory (borrowing how the European Court of Human Rights insists on the realness of granted rights).

26 thoughts on “‘They Are Not Starting From A Blank Slate’”