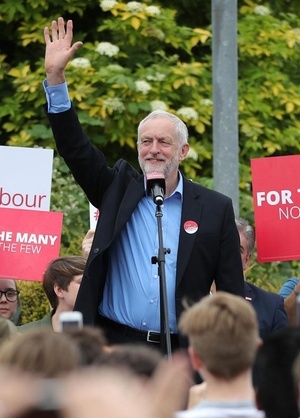 It didn’t seem possible, at first, but the British General Election has gotten very interesting indeed. Let me give praise where it’s due, Jeremy Corbyn has had a very good campaign. A campaign in which every most likely option still sees him winning.

It has been the little things that have seen him succeed. Someone has got to him, and has made him understand, the importance of the superficial in politics.

That’s something, as a conviction politician, he seems to have worked against his entire political life. The dark jacket has replaced the tweed. The beard is neatly trimmed. But it is his tone of voice that has been winning over many.

Again, and I know it’s also superficial, how you say something in politics is often more important than what you say. His calm authoritative tones are helping to overcome many of the negatives that have been foisted on to him.

He is being helped by the implosion of Theresa May, in being seen as a credible leader. She has come to be seen as lacking in strength, stability or reason, May is being exposed as being the opposite of what she and her party have portrayed herself as being. She, and they (the Tories) are exposing the entitled elitism that is at the heart of their rotten core.

Corbyn, and Labour, may also be gaining from incumbent negativity, which should be factored in most election situations these days. In every election there is reaction against whoever is in office or holds power. In recent times holding office has become more difficult to maintain. Anyone who comes up with a narrative that opposes the prevailing narrative, will gain electorally.

The British Labour Party manifesto pushes all the right buttons in this regard. It is refreshing that British voters have such a distinct choice between two clearly different political propositions.

I still have reservations about Corbyn. I’m with him that the issue of achieving social and economic equality, is the dominant issue of our times. I am with him that the security myth needs to be exposed, that the waste of billions, in whatever currency, towards the dubious goal of finding better ways of killing each other, is nothing other than obscene.

Where we diverge is his dogmatism, and that of his supporters, that wealth creating mechanisms are by their nature wrong. Too many progressives turn their backs on markets, seeing the realisation of profit as being crimes against the people.

We do, of course, need a debate as to what constitutes wealth. We should not, however, see the creation of wealth itself as a problem. It’s how wealth is distributed that must remain our central concern.

I would still prefer Corbyn over any Tory alternative. That alternative of only being interested in wealth creation for the sake of a privileged elite.

I continue to find it hard to forgive Corbyn for his languid performance during the Brexit referendum. Still I would prefer him over May, to be negotiating with the European Union.

When the results arrive I will still be looking first at the results of the Greens, who I think are also having a good campaign. I expect the SNP to still remain dominant in Scotland. Regarding the rest of the election I will be cheering with others. Go Jeremy Go!

77 thoughts on “Cometh The Man”