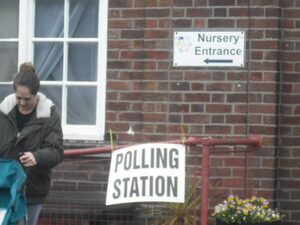 I’ve just voted, the third time within a year. Last June 23 was the Brexit Vote, March 2 this year was Stormont Elections.

Despite the appearance of self-governing, The Top Bit of Ireland is still effectively controlled by London. 56% of voters in The North elected to remain in the EU. It seems we’re leaving, anyway. There’s no Government in seat at Stormont since voting day in March.

The 50/50 Unionist/Nationalist seems a difficult resolve. Apparently, talks at resuming Government will take place at the end of June, where no doubt there’ll be debates regarding crocodiles. [Arlene’s Foster’s reference to Líofa – funding to teaching Irish]

In 2015 – at the last British General Election, there were 11 Unionist MPs elected, the rest were Nationalist, out of a total of 18. The 11 Unionist MPs embraced their tradition, and aligned themselves with The Conservative Party and contributed to forming The Tory Government.

The Top Bit of Ireland Nationalist vote is indirectly a vote for Labour at General Elections, given that the Nationalists tend to seat with Labour, may help Jeremy Corbyn into Downing Street.

I voted for Máirtín Ó Muilleoir, former Lord Mayor of Belfast, and South Belfast MLA. The fact that Sinn Féin don’t take a seat in Westminster is no bother for me, if they go along with Labour – that is what I was voting for.

Living In The UK?

4 thoughts on “My Third Time In A Year”