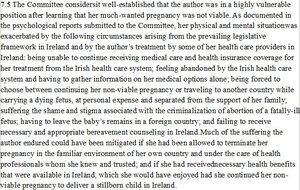 From the decision by the UN Human Rights Committee

The United Nations has once again ruled that Ireland’s abortion laws have subjected a woman to cruel, inhumane and degrading treatment.

It is the second time in 12 months that the UN’s human rights committee has denounced the abortion regime in the Republic, which denies women with fatal foetal abnormalities the right to terminate pregnancies.

The committee has found in favour of Siobhán Whelan, an Irish woman who was denied access to an abortion in 2010 despite being diagnosed with fatal foetal syndrome during her pregnancy, it was announced on Tuesday.

Fatal foetal abnormalities include where the foetus has under-developed vital organs such as the heart and brain, which would mean if the pregnancy went to full term the baby would either be stillborn or die within hours of birth.

Whelan’s case mirrors that of Amanda Mellet, who was also forced to travel to Britain to end her pregnancy.

Last year the UN ruled in Mellet’s favour, and she made history by becoming the first woman to be compensated by the Irish state over the trauma she suffered.

In the Whelan case, the UN committee held that Ireland must also provide her with reparations for the harm she suffered and reform its laws to ensure other women do not face similar human rights violations. 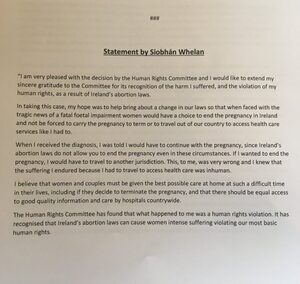 UK Department of Health has just published its abortion statistics for last yr. 3,265 women from ROI in 2016, 724 from Northern Ireland

Forty-nine percent of women from ROI were married or in civil partnerships and most (1,563) were between ages of 20 and 29

The figure for both has fallen, as expected by pro-choice groups. It does not include any pregnancies illegally terminated here w pills

Vast majority, 95.5 per cent, were terminated under ground C – which is the mental health clause, often perceived as an “on request” model

Most terminations, 2,550, were surgical for ROI women with 715 medical terminations. Majority in both cases were between 9 and 12 wks

The UN’s decision can be read in full here

26 thoughts on “Denunciation Once Again”