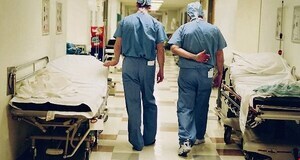 Employed or Self-Employed, that is the question for GPs following the Government’ promise to provide free GP care for all at source.

The contract between individual GPs and the State for the provision of medical services labels all such GPs as self-employed.

The Revenue Commissioners have long known that insurability of employment (employed or self-employed) decisions are based on established facts, not assumptions and as such there is no basis for categorisations purely by occupation.

Each case is assessed on it’s own merit in accordance with the general precedents of Irish Law. Operations which seem to be the same, may differ in the actual terms and conditions in any given case. Job title does not define employment status.

The financial implications for the State are substantial.

In the event of a successful application, a ‘Demand Notice’ will issue from the Department of Social Protection to the Health Service Executive to collect the arrears of PRSI contributions due (employee and employer).

If the employer, in this case the HSE, fails to pay up, then the HSE must be pursued by the Department. The Department of Social Protection will credit the contributions to the employee and therefore entitlements to benefits will be secured.

This would mean restoration of contributions to the initial date of employment and immediate entitlement to the relevant benefits in accordance with normal employee conditions.

The Supreme Court has given a definitive judgement on the appropriate test to be applied in determining whether any individual is employed under a contract of services or a contract for services.

The decision concerned is Henry Denny & Sons (Ireland) Limited -v- The Minister for Social Welfare (1988) and indeed the Supreme Court followed that judgement in Tierney -v- An Post (2000).

In the Henry Denny case, Keane J, as he then was, considered firstly how the distinction had formally been drawn up by reference to the degree of control which was exercised by one party over the other in the performance of the work but noted that the fundamental test to be applied is whether the person who was engaged to perform the services is performing them as a person in business on his/her own account.

Keane J said at page 50 of the judgement that, while each case was to be determined in light of its particular facts and circumstances, in general a person will be regarded as providing his or her services under a contract of service and not as an independent contractor where he or she is providing those services for another person and not for himself/herself.The degree of control exercised over how the work is to be performed, although a factor to be taken into account, is not decisive.

It is noteworthy that in the Denny case the contract between the parties was in writing and was drafted with considerable care with a view to ensuring that the punitive employee was regarded in law as an Independent Contractor.

Nevertheless, both the High Court and the Supreme Court confirmed that the person was in fact an employee.

It was not the written contract which determined employment status but instead in the second judgement in the Denny case delivered in the Supreme Court, Murphy J gave implicit approval to the examination of the reality of the relationship to determine it’s true legal import.

Many features of the GMS contract are more in line with a contract of service rather than a contract for service. GPs must render personal service, work set hours and are subject to a great deal of control and direction.

Although convoluted systems are in place for holiday and sick pay, essentially GPs are not free to hire a substitute of their own choosing at a price decided independently between the substitute and the GP, all of which would not normally be the case for self employed persons.

On the substantive issue of being in business on their own account, the contract system restricts competition between GP practices.

The GMS system favours existing GP practices and protects them from competition from newly-qualified GPs. It reduces the number of GP practices available to patients, by creating unnecessary barriers to entry.

Changes in the GMS contract cannot take place without the agreement of the Irish Medical Organisation.

This includes agreement on payments made to GPs under the GMS. Such collective negotiations by “undertakings” on fees are prohibited by Section 4 of the Competition Act 2002 and by Article 101 of the Treaty on the Functioning of the European Union.

The prohibition on collective negotiations is there to protect consumers and the State from concerted practices by independent businesses which could result in them (ie. consumers and/or the State) paying higher prices than necessary for their purchases. In the current instance, its purpose is to protect the State from paying excess prices for GP services purchased by the HSE.

The restrictions on competition arising out of the GMS system affect both private patients and public patients.

It is assumed that “the market” will take care of them. This ignores the fact that the market for private patients is itself significantly affected by the operation of the GMS.

The GMS system impacts directly on the commercial behaviour of almost every GP practice in the State, affecting decisions on where GPs locate, the number of GP practices established, the nature of such practices and the profitability of individual practices.

This in turn affects the provision of services for private patients and indirectly influences the price GPs charge private patients. The GMS contract severely restricts the ability of a GP to offer his/her services concurrently to others or to profit from sound management or scheduling.

The HSE has placed a self-employed label on all GPs. Misclassification is often the result of cost-cutting measures instituted by employers at the expense of their employees.

Misclassified employees lose workplace protections, including the right to join a union; Maternity leave; face an increased tax burden; receive no overtime pay; and may have no recourse for workplace injury violations and disability-related disputes.

Strange that employment status of GPs doesn’t feature at all in the Oireachtas Committee on the Future of Healthcare report.

Yesterday: Self Employment is Not Working

What Have They Got Against The Self-Employed?