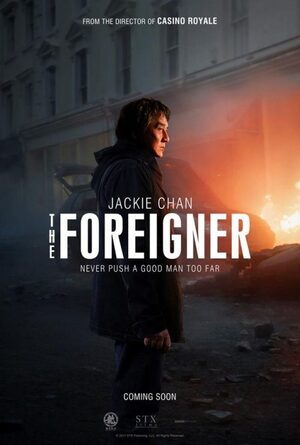 1. You might recall some months ago, photos of Pierce Brosnan on the set of his next film emerged, in which he bore a striking resemblance to Gerry Adams. Well, we’re delighted to report that wasn’t an exaggeration and this is a real film that got made. Here comes The Foreigner, also starring Jackie Chan, who it appears has come of age and is ready to challenge Liam Neeson for the disgruntled father with a particular set of skills niche.

2. The trailer unleashes most, if not all of the plot so instead let’s talk about Gerry…sorry, Liam Hennessy. The blurb says he’s a British government official whose own past may hold the clues to the elusive killers (of Jackie’s daughter, that is). The timing of releases like this is really something. We almost never see film or TV address the IRA in a modern context (broadly speaking – feel free to correct me below).

3. Now, when there’s a worry that things may start to slip backwards if we’re not careful, wouldn’t you know it, they’ve made a knockabout Taken-style action movie that appears to imply that the IRA are not only detonating bombs in London, but also that DEFINITELY FICTIONAL reformed terrorists-turned-Deputy First Ministers are actually anything but reformed.

4. The last major cinema release about the Troubles was the brilliant ’71 (2014), which declines to take sides, instead depicting good and evil on all sides of the conflict. The result felt as if John Carpenter and Ken Loach made a film together.

5. Anyway, The Foreigner. The filmmakers got a slap on the wrist when filming, by blowing up a bus on a London bridge. Not everybody got the memo that it was for a movie.

6. The film reunites Brosnan with his Goldeneye (1998) director Martin Campbell, who also gave us Casino Royale (2006). That said, he also gave us The Green Lantern and The Mask of Zorro, so swings and roundabouts.

7. Jackie Chan may be getting on a bit, but it looks like he can still swing off/jump over/jump off things with the best of them. This looks to be a bit of a departure. Usually his stunt-heavy, kung-fu crazy roles are played for laughs (think Rush Hour and, I dunno, The Tuxedo or one of them). This movie, and his character in particular, look to be quite humourless (not for nothing, of course).

8. He hasn’t been seen on the big screen here since 2010’S The Karate Kid remake, but has been knocking them out at a ferocious rate in China. He was also awarded an honorary Academy Award in November last year, for his “extraordinary achievements” in film.

9. Based on Stephen Leather’s novel ‘The Chinaman’, which was a title that definitely needed changing. Any excuse.

10. Some eagle-eyed internet people spotted that his passport (@57) says he’s Vietnamese and that this itself is a slur as Chan is Chinese.

Verdict: This is a work of fiction