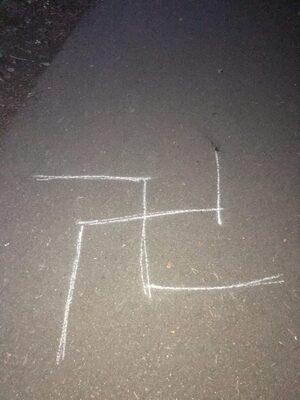 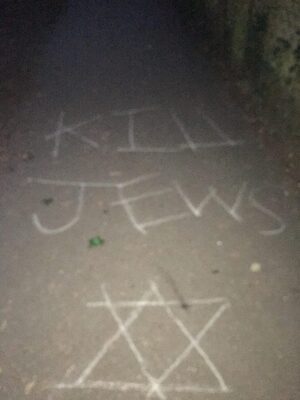 I was out for a walk on Friday night, c. 10pm, when I encountered virulent and violent anti-Semitic graffiti, in chalk and on a pathway, in Killiney Hill [Killiney, County Dublin]

After taking a few photos, I returned home and came back with a few bottles of water to clear the mess. It was dark, so I couldn’t clearly ascertain what remained, but I think it was more or less removed.

I got the sense that the graffiti had been recently applied, but that path would have gotten a lot of footfall on a fine Saturday morning, so hopefully most were spared the unpleasant surprise I had.

Anyways, I wasn’t quite sure what the best way to handle this situation was after the fact. On the one hand, in removing the graffiti I was hoping to mitigate the desired effect intended by the small-minded culprits, whatever that may have been. Attempting to publicize the photos, then, at first seemed counterintuitive at best, and counterproductive at worst.

But on the other hand, and after reading that the Anti-Defamation League recently reported an 86% increase in anti-semitic incidents this year, I wondered if highlighting – and, hopefully, calling out – the emboldened, if not normalized, racist and bigoted elements in our society was an important act of civic duty.

I don’t know the answer to these questions, but I have come to appreciate the editorial responsibility ye have cultivated here on BS.

PS Pretty sure the numnuts responsible got the orientation of the swastika wrong! Unless we have anti-semite Hindus or Jains on our hands. Numnuts seems more likely.

Meanwhile, Back In Phibsboro

How To Repurpose Swastika Graffiti

76 thoughts on “Himmler Tried Something Similar”