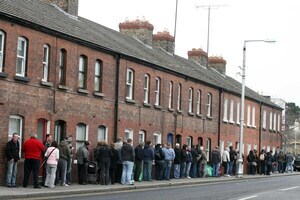 Writer and activist Eamonn Kelly this week concluded an investigation into job activation schemes in Ireland.

Many thought he lacked positivity..

I noticed that one of the criticisms leveled at my articles about JobPath was that they were “negative”.I’m aware that there is a view that negative thinking is destructive of “good” ideas, to the extent that some overly-enthusiastic positive-thinkers appear to believe that negative thinking needs to be stamped out in the name of progress.

The concept of positivity is one that is held dear by Irish people who regard themselves as “progressive”, and is a common badge of honour sported among the artistic elite in Ireland, and often regarded as a necessary antidote – or even as a challenge to – traditional Irish “begrudgery”.

The underlying assumption being that begrudgery and negative thinking are the same thing. Which they’re not. One is destructive envy; while the other, critical thinking, seeks ultimately to be constructive.

There is a strain of positive thinking abroad in Ireland that originated in the US, and it is not as wholesome as its smiling presentation might suggest. If this were a self-help manual we might dub this particular strain of positivity as Toxic Positivity.

The US journalist Barbara Ehrenreich wrote two books on this type of positivity: “Smile or Die: How Positive Thinking Fooled America and the World.” and “Bright-Sided: How Positive Thinking is Undermining America.” Their titles alone shed light on the problem inherent in certain basic assumptions concerning positive thinking.

Ehrenreich shows how positive thinking has its roots in corporate America, where it mingled with US-style Christianity, to produce a strain of delusion that leaves people believing they can think themselves rich by smiling and adopting a positive mental outlook.

The downside to this idea of course, is that you can also “fail” to think yourself rich, by falling into negative thinking, a kind of Corporate original sin that causes not only poverty, but also cancer and brain tumours and all the other awful maladies that life can throw at people.

This idea, that people are architects of their own misfortune through “wrong” thinking, is a very convenient fiction for the various power entities that rule the world.

At its most cynical, and even darkly comical, a corporate spokesperson might claim that people who were say, poisoned by arsenic in the sugar brekkies, have only themselves to blame for not thinking “correctly”. (The spokesperson might be right. They should be eating natural oats.)

The concept is genius really, because it also contains an in-built guilt system that gnaws away at some unfortunate people who may truly believe that if they had thought more happy thoughts, in a more consistent manner, that their lives mightn’t have turned out to be quite so miserable.

But the basic, wildly magical assumption that you can think yourself rich, and that you can think the world into being a better place, by affecting constant contentment, is a travesty of the knowledge that imagination, perhaps more than any other human trait, has the power to shape reality.

Such a power is of course dangerous to certain entrenched powers.

The toxic positive thinking model, appears to deliberately set out to destroy these “dangerous” imaginative and creative attributes, offering a more childish positivity, one that results in the creation of good and obedient workers who smile and smile and smile, toiling away in non-union working environments, suffering decreasing wages year on year, and longer working lives and decreasing pension benefits.

But they smile on, smiling as big as they can, in the vain hope that their forced positive mental attitude will somehow change the awful world their corporate masters are imposing on them.

This kind of positivity has been sold so effectively that it is now almost a religion, and one of its mortal sins is, you’ve guessed it, negative thinking. Once an attribute is considered a type of “sin”, it really needs to be watched closely, particularly in Ireland, simply because we were so deeply indoctrinated by the Church over so many generations that we’re likely to be a little over-sensitive to things like sins and sinners and judgements and commandments and so on.

This is perhaps why it has been so easy to convince the public that the unemployed are economic sinners deserving of being penalized by the JobPath system.

Given the prevailing unquestioning acceptance that positive thinking is a social “good”, it wouldn’t be difficult to imagine a scenario where a law might be passed designed to reprimand people for expressing negative opinions, on the grounds that such opinions might be undermining a perceived national or regional success story.

Orwell anticipated this in “1984”, and called it “thoughtcrime”. The political intention of the authority in “1984” was to destroy opposition at source by destroying imagination.

The strategy was to simplify and reduce language, destroying its richness and its complexity, reducing concepts to one-word or one-phrase simplicities, depriving the imagination of the tools to think.

Eamonn Kelly: Forget Them Not

26 thoughts on “Negativity: A Positive Spin”