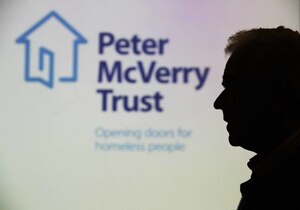 In today’s Irish Times Fr Peter McVerry takes the Taoiseach to task for implying that homelessness does not exist, that what we call homelessness is really only a kind of aspiration for better homes. That those who complain of homelessness are really saying that they’d like nicer places to live.

Here’s the quote from the Taoiseach that Peter McVerry angrily takes issue with:

It is important to recall that, of those 90,000 on the housing list, the majority are in houses or apartments, just not the permanent homes they would like to have and which we would like them to have.” [Leader’s Questions, July 12, 2017]

So, according to the Taoiseach, the homeless have houses and apartments, but they are simply being fussy and want better ones.

And since he is the Taoiseach, and leader of the free world as we understand it here in this soggy corner of Europe, the Homeless Crisis has now been officially downgraded to the much more manageable Fussiness Crisis.

A crisis where taste is not, unfortunately, being matched by reality. Something a good bucket of paint and a joss-stick might solve. A problem that a simple shift in mental attitude might dispel.

Fr Peter McVerry’s article produces enough hard evidence and figures to show, just in case anyone was in any doubt, that we really do have a homeless crisis and not just a “Fussiness Crisis” as the Taoiseach appears to be suggesting.

The article includes a graphic incorporating figures from the central statistics office that clearly show there are 6,906 homeless people in Ireland, 73% of them in Dublin. According to the Taoiseach, and this now exists in the Dail records, “very many of these, if not most, have houses and apartments.”

Where I come from, this is called a bare-faced lie. But I come from a relatively humble working-class background and I’m maybe not sophisticated enough to tell the difference between a bare-faced lie and some complex housing/social policy thingy that someone like me might not be fully capable of grasping.

The Taoiseach’s suggestion that there is no homelessness also implies that rough-sleepers and kids living on fast food and crisps in hotel accommodations, as reported in the Irish Times yesterday, are only figments of the collective imagination, like some kind of mass delusionary experience.

The idea also appears to suggest that the work Fr Peter McVerry and people of his ilk have been doing all these years, against increasingly ambivalent odds, is also delusional in its assessment of the problems they are addressing every working day of their lives, and the political policies that appear to be creating these problems.

There was an old joke in working class Dublin to describe tough neighbourhoods. You’d say “They ate their young in that place!” This came to mind when I noticed yesterday’s census reports that 1 in 4 homeless people are under the age of 18, and that the largest homeless age group was children under 4 years of age.

People may soon be saying of Ireland. “Sure, they ate their young in that place.”

18 thoughts on “Making A Fuss Out Of A Crisis”