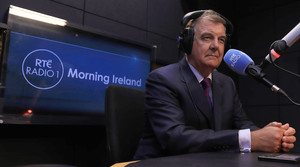 After 21 years presenting RTÉ One’s Six One News programme, the broadcaster will move to be a permanent presenter on RTÉ Radio 1’s flagship radio programme at the end of October.

In addition to presenting Morning Ireland, Bryan will continue to be a key presenter for RTÉ’s television coverage of special state events including the forthcoming Budget 2018.

This September, first time television presenter Zainab Boladale from Ennis, Co. Clare is the newest addition to the news2day team.

news2day is RTÉ’s news service designed specifically for children, featuring Irish and international news of interest to a young audience.

Following a call out to media & journalism graduates across the country, and a comprehensive audition process, DCU graduate Zainab, who was born in Lagos, Nigeria and came to ireland when she was four-years-old was chosen to join the team and began broadcasting live this week on RTÉ Two and RTÉ News Now.

What Did You Call Me?

9 thoughts on “The Rising Dobson”