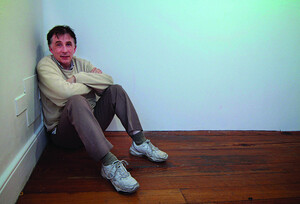 Saint is a new poem by Kevin Higgins dedicated to the “black babies wing of the Irish left, those who, to paraphrase GK Chesterton, are so busy loving humanity they can never find the time, or the inclination, to show solidarity with their next door neighbours.”

Because the progressive faction of the Magdalene Sisters
were no longer taking applications,
you instead tour the better fed Gender Studies Departments
of the Eastern Seaboard, preaching
your gospel of the little brown victim.

With the shrunken head of a Native American, ripped
from its original owner at the Battle of The Rickety
Left Elbow; the eyeballs of indigenous Bolivians
which have seen versions of Strictly
Come Dancing we can only imagine;

or, more prosaic days, with the rudely
annexed canine teeth of Palestinians,
which you carry about the place in a glass jar
you had specially made by a mate in Kinvara
who’s also a part time Shaman, you tickle
the consciences of those who think
life’s all olives and Pyrenees sheep brie,
and in return they titillate you
with all the fine cheeses.

For you are toast of the third world
liberation wing of Galway Lawn Tennis Club.

17 thoughts on “For Your Consideration: Saint”