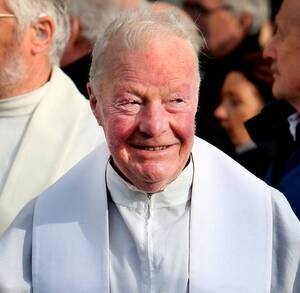 Fr Eoghan Haughey, an Oblate priest and  brother of Charles Haughey died in, 2016 at the age of 82.

Last Sunday’s  Sunday Independent reported that he left €454,530 in his will.

The strange thing about Father Haughey leaving Euro 454,530 in his will was that he had a SOLEMN VOW OF POVERTY as a member of the religious order called the Oblates of the Immaculate Heart of Mary whose main house in Ireland is at Inchicore in Dublin.

Priests, Brothers and Nuns who are members of religious orders are not supposed to own anything – not even a pencil, The rule is that EVERYTHING you have is owned by the religious order and you have to hand everything over to them.

Members of religious orders are not supposed to have private bank accounts or credit cards.

I think that this is a parable of the decline of the Religious Life in our time.

Priest Leaves Half A Million In His Will (ThinkingCatholic)