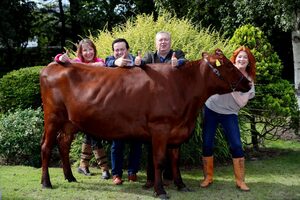 The 86th National Ploughing Championships will take place from  September 19-21 at Screggan, Tullamore.

Do you enjoy ploughing?

Both Tracy Clifford on RTÉ 2FM and The Ray D’Arcy Show on RTÉ Radio 1 will broadcast from ‘Ploughing’ for the first time, on Tuesday and Wednesday respectively.

Aine Lawlor and Marty Morrissey will return to present The Ploughing Live every evening on RTÉ One from 7.00-7.30pm;

Drivetime on RTÉ Radio 1 will feature live reports daily, while RTÉ One’s, Six One News will also include live reports from Ploughing 2017;

RTÉ Radio 1’s Morning Ireland and Today with Sean O’Rourke will be live from Screggan on Tuesday morning;

Marty in the Morning on RTÉ lyric fm will get things off to a positive start from 10am – 12noon on Wednesday, with The Connor Mc Keon Band and Neven Maguire among Marty’s guests. Marty will be followed by Countrywide live, presented by Damien O’Reilly

The Sunday Game’s live interactive panel event is back by popular demand at 4.45pm on Wednesday;

RTÉ lyric fm Quartet will ease people into the day with a live performance from 9.00 – 11.00am on Thursday;

While the Irish language will be well represented with Rónán agus Bláthnaid Beo ar RTÉ Raidió na Gaeltachta from 4 – 5pm on Thursday.

Late Late Show host Ryan Tubridy is to face off against rugby international Sean O’Brien as the chatshow holds its first ever Plough Off live on Friday night.

Ryan is no stranger to ploughing, of course, having first turned his hand to churning the sod at last year’s National Ploughing Championships.

Christ on a bike.

The Ploughs And The Starry Eyed

20 thoughts on “A Packed Furrow”