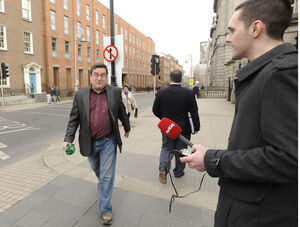 Dan Boyle: “Paradoxically we remain comfortable in t-shirts and jeans, however ridiculous we may look to others.”

The daughter’s daughter has entered the State education system for the first time. It won’t be a bother to her. She is clever enough to absorb what she has to, but also confident to challenge when she will need to.

As a life marker, for me, it has arrived about ten years earlier than anticipated. I don’t beat myself up about it. A sight of her cheeky grin, or to glory in the bliss of her making an utterly, unguarded comment, banishes any negative feeling.

As long as she, and others like her, maintain that untamed confidence, I have less fear for their future. Collectively, I feel, they will possess the wherewithal to deal with much of the mess we are bequeathing them.

The lost generation I’d like to identify is that of my own. Those of us over fifty years of age hurtling towards the time of prohibited employment (currently projected at about seventy years of age).

I realise it is difficult to elicit any sympathy for this generation, the generation who have been co-conspirators in creating many of the global and societal problems we face. This also being the generation that has acquired the highest levels of individual wealth, more than any previous generation.

The bias I speak of isn’t economic. Very often it isn’t even conscious, but it is attitudinal. It is based on the assumption that ageing causes more progressive diminution of a person’s faculties than is actually the case.

This in turn fosters a commonly held myth, that experience is not such an important component of ability.

Many in my generation repudiate the uniform acceptance of our predecessors. Paradoxically we remain comfortable in t-shirts and jeans, however ridiculous we may look to others.

Hearing The Clash or The Jam on the radio transports us back to a time many of us never really left.

In our twenties we really did know it all. Until, that is, we slowly came to learn that wisdom is realising how much there is to know, and how much of that can never be known.

I no longer want to be down with the kids. Occasionally I want to shake a few of them, when I see them repeating so many of the mistakes that we had made.

Our’s was the generation that came after peak Dylan. He was never our spokesperson. However, for us post baby boomers, in his song ‘My Back Pages‘, he comes closest to defining where we see ourselves in life.

“Ah but I was so much older then, I’m younger than that now.”