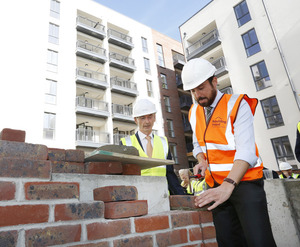 We have a government that is philosophically opposed to the idea of The State directly being involved in the provision of housing. Its belief is founded on the understanding, that it is wrong to interfere in a market, that should naturally be able to correct itself.

This might be all well and good, if a housing market actually existed in Ireland. What has existed, for several decades, in the absence of a real market, has been one of the most effective cartels operating in the world.

Land has been sat on. Planning permissions have been rolled over and have been left unused. A growing number of housing units have been left vacant, or allowed to go derelict. All exercises in restricting supply, in order to maximise price, and ultimately profit.

With these circumstances in play, The State has an obligation to directly provide housing, so as to allow an actual proper market be put in place.

Those of us old enough to  remember when The State was last involved in the direct provision of housing, should pause and consider that it was far from being an idyllic experience.

Too often in the past, particularly in the 1970s, these interventions led to institutionalised ghettoes of poor housing stock.

But for most of the history of this State, the record of social housing provision has been good. In the city in which I live, Cork, one third of the housing units were built on behalf of the City Council.

Where the market is always right merchants may have a point is that being a housing provider and a housing regulator, is rarely a good idea. However when cartel economics has taken such deep root, there is a moral duty on The State to intervene.

We should not aspire to recreate the National Building Agency of old, rather we should be establishing a new body, one not solely dedicated to providing social housing alone.

By making available wider tenancy choices, The State should in theory be producing a new floor, pardon the pun, on prices in this market.

A way of overcoming the regulator/developer dilemma, would be to make voluntary housing bodies responsible for the management of this new housing stock. Such bodies have shown themselves to be adept, especially in the management of community facilities.

It will still be as a regulator that The State can make its greatest impact, especially in the rental sector. Achieving better rent security through making longer term leases the norm, is what we should be striving for.

Government unwillingness to tackle these obvious reforms is a whole different basket of self interests.