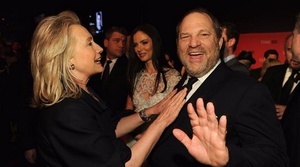 Among his biggest beneficiaries are President Barack Obama, whose daughter was an intern with Mr. Weinstein’s company this year. At a career workshop for high schoolers at the White House, where Mr. Weinstein was a guest several times, Michelle Obama called him “a wonderful human being, a good friend and just a powerhouse.”

Mr. Weinstein is also a years long friend of both Bill and Hillary Clinton, for whose 2016 presidential campaign he was a major contributor and driving force, holding a fund-raiser in his home at one point. He’s raised money for Planned Parenthood, helped endow a faculty chair at Rutgers University in Gloria Steinem’s name and distributed a film, “The Hunting Ground,” about campus sexual assault.