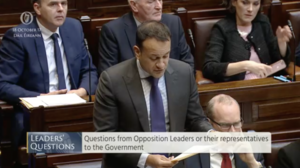 Taoiseach Leo Varadkar (above) spoke about the tracker mortgage scandal.

“The Central Bank yesterday published its latest update on its industry-wide examination of tracker mortgages which was commenced in 2015. Approximately 13,000 impacted accounts have been identified by lenders as of the end of September, that’s an increase of 3,100 since the March report.

Thousands may be unaware they are victims of tracker controversy (Conor Pope, The Irish Times)