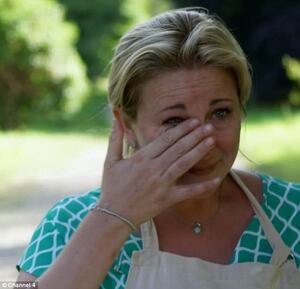 Stacey Hart was voted off last night’s bake off

It might have been the Semi-Final but it was all a bit Craic’a’ lacking for me by the time the tea-cloth was lifted off the Technical.

We’ve gotten to know that Patisserie week is all about precision and finesse and posh cake, and to be fair most home bakers do manage Choux buns and Meringues anyway, so it was always going to be about the finishing touches, but it was still all to too annoyingly predictable, even samie once the Craquelin Signature was over. As for Craquelin (or crackling) I would no more be arsed than going beyond Google to get the correct spelling.

The producers egged on Stacey’s chances a bit, and I know that’s television, but they were fooling no-one. Even the Hollywood was embarrassing himself looking for a way to make it more of a tense finish. I’d say Stacey had her stuff already packed in the boot before he even said they’d have to do a “Look Back” to separate them into who was staying, and who was going to be last seen with Jo Brand.

Sophie and Steven were always going to be in the Final, sur’ we knew that before Bread week. And despite her rankings within the Bake-Off tins, Kate was always my dark horse.

Although I do appreciate Steven’s tip for Choux (the peak kinda flops over and take it easy with the egg) the only thing else to remark about the Signature was Kate’s not so very coy anti-Brexit theme with flavours from all over the EU being piped in.

When it got to the Technical I had to admit that I was more interested in Noel’s chest hair. But that could be just me, I don’t do Pistachio anything; in fact, nuts are bar snacks as far as I’m concerned and shouldn’t have an’ting to do with cake. But with respect to our hosts over there in the Tent, I’ll remain polite and tip my hat to the Almond and the Hazelnut on their respective roles in confectionary matters. But Jesus green cakes lads… yuck.

The Show-Stopper wasn’t very grand and French Patisserie at all, I’m not even sure I’d eat any of them. My teeth are actually quivering at the thought of all that sugar. But it was funny to watch Steven’s basket melt wasn’t it?

So now it’s all about the three bakers left in the Tent.

Kate herself seems to have caught the Hollywood off guard, and I’m beginning to wonder if he only ever saw her as his pet Scouse, like last night he admitted to being “freaked out” by her flavours, and it was always Prue that was more in awe of her. Like with the Apple Cake  (remember Prue saying it was the best cake she ever tasted) and she wouldn’t shurr’up about the colours and flavours of the Rainbow centre piece Kate put in front of them.

Sophie hasn’t put a foot wrong yet. All through the series she was never even threatened with the risk of leaving before the final. Like, last night the only dodge comments she got was about “thick ganache” – as if that’s a bad thing; and pickie Hollywood saying there should be 7 layers in her Opera Cake tutu filler.

So now Steven. There was no way the Hollywood wasn’t going to put him into the final. I’d say the Hollywood’s tan faded into a pasty soggy bottom at the thought of not having Steven in the last 3.

So all the Frill-bakes will end next week and the GBBO Season 8 Final. I predict the biggest Channel 4 viewing audience ever, and since I mentioned Brexit earlier, I reuse it before it goes off; Unlike the other Brexit Katie, this one will be welcome into my gaff anytime Hon’Kate!

I bet there’ll be more ructions as the Brits split themselves down the middle over this one too.

Frilly can be followed on @frillykeane

Is RTE Lol-ing At Its madridcitytourist Own Since opening our doors in 2003, has delivered thousands of web and digital experiences, across a multitude of jugglersareus platforms alarge enough to offer you the knowledge and expertise we’ve gained servicing the Corporate and gaineswood Government sectors, yet small enough to care. .