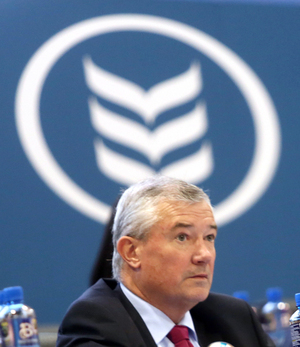 Asked about whether the bank had any issues impending similar to those that were identified at Permanent TSB in relation to customers and the mortgage interest rates they were entitled to secure, Mr Boucher said if the bank had any material disclosure of that kind, it would be making it.

“I’m talking to the market today. Anything that would have a material impact on our reputation is something I would disclose. If we identify a mistake, we engage with the regulatory authorities and do remediation with the customers expeditiously,” he said.

The bank announced on Friday that Mr Boucher had informed the company of his intention to leave and said a selection process was under way to appoint a new CEO. Mr Boucher said he would would continue in his role “pending completion” of this process, having led the bank since February 2009.
Mr Boucher said that while he enjoyed his job and was excited about the group’s “transformational investment” in its IT systems, the time was right to hand over the baton.

Earlier this week Bank of Ireland said it had identified another 6,000 customers who were wrongly removed from low-interest tracker mortgage loans. This brings to 10,300 the number of people affected by the controversy at Bank of Ireland alone.

he total cost of putting customers back on low tracker rates, refunding them for overcharged interest payments, and compensating them at a rate of 10pc of the refunds, will cost the bank up to €200m. This is up from €26m previously set aside by the bank.

Richie Boucher to step down as Bank of Ireland CEO (Irish Times, March 24, 2017)

Anything Good On Sinn Fein TV?