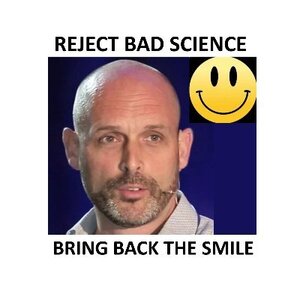 Some more ultra-propaganda in The Guardian today – the corporate forces have good reach, I’ll hand them that. But their evil will hopefully be their undoing in time… https://t.co/YnFZvK1OX9

Sometimes, Stuart Ritchie feels like he’s being pursued by an army of smiley faces. The lecturer at the Institute of Psychiatry, Psychology and Neuroscience at King’s College London, is not delusional: instead, and somewhat to his surprise, he is on the frontline of a coronavirus information war.

The emojis often decorate the Twitter profiles of the self-proclaimed “lockdown sceptics”, a subset of social media users who remain unconvinced that coronavirus restrictions are necessary, even as the number of deaths in the UK approaches 100,000.

Often they are indignant at the efforts of Ritchie and others to refute the claims of a small but thoroughly amplified cadre of columnists, academics and enthusiastic amateurs, ranging from the free speech advocate Toby Young to the engineer and diet guru Ivor Cummins, who provide dubious but densely argued justifications for their stance.

At some point they settled on the smiley as their membership badge. If it is meant to be friendly, it doesn’t necessarily come across that way…. Previously: Eoghan and Ted on Broadsheet Galway County Council has issued a formal statement including an apology by the Chief Executive Kevin Kelly and Cathaoirleach James Charity for the failings of the local authority in the operation of the Tuam mother and baby home.

“As Cathaoirleach of the County of Galway, on behalf of the Members, the Chief Executive and staff, I offer a sincere and humble apology for the failings of this local authority.

We are deeply sorry that this Council did not do enough to ensure appropriate care, compassion and protection to the mothers and babies who passed through the threshold of the Tuam Mother and Baby Home, and to those children who were born and died there.

We further deeply regret that Galway County Council did not ensure there were enough safe- guards and measures in place to guarantee and ensure that children boarded out from the Home were better cared for, protected and cherished.

To the shame and sorrow of all of us, this Council did not ensure that those who died in the Tuam Mother and Baby Home were afforded the dignity of an appropriate place of rest, which was the very least that they deserved.

We are profoundly sorry, that as a local authority, this Council did not have the foresight or courage to at all times to ensure the welfare of those entrusted to its care was paramount, and to be kinder, more compassionate, and more charitable.

To all those with a personal connection to the Tuam Mother and Baby Home, in particular, the frightened mothers and innocent children, to their families and to the people of County Galway, Ireland and beyond, this Local Authority is humbly sorry.”

“The Council acknowledges the commitment by Government to advance burials legislation to support the excavation, exhumation and, where possible, the identification of remains together with their dignified reburial. The Council has and will continue to actively assist the ongoing work to implement the Government’s agreed course of action and response for the Tuam site. On his first day in office, Joe Biden (top) banned discrimination based on gender expression

Further to Joe Biden’s executive order that would enforce the US Supreme Court’s 2020 Bostock v Clayton decision declaring that :

“Children should be able to learn without worrying about whether they will be denied access to the rest room, the locker room, or school sports…..All persons should receive equal treatment under the law, no matter their gender identity or sexual orientation.”

The order, mandates that every agency must act to ensure the enforcement of this new rule within 100 days of 20 January.

Crucially, it states the Bostock decision should also apply to Title IX, the federal law that prohibits discrimination in federally funded schools, in keeping with Biden campaign promise that his Department of Education would investigate and address any violations of transgender students’ rights. States that fail to comply would risk legal action or the loss of federal education funding.

Last year, bills to restrict transgender athletes’ participation to their sex recorded at birth were introduced in 17 different US statehouses…

In Bostock, the justices held that Title VII of the Civil Rights Act of 1964 prohibited an employer from firing an employee on the basis of homosexuality or “transgender status.” Justice Neil Gorsuch, writing for a 6-3 majority, took pains to clarify that the decision was limited to employment and had no bearing on “sex-segregated bathrooms, locker rooms, and dress codes”—all regulated under Title IX of the 1972 Education Amendments. “Under Title VII, too,” the majority added, “we do not purport to address bathrooms, locker rooms, or anything else of the kind.”

The Biden executive order is far more ambitious. Any school that receives federal funding—including nearly every public high school—must either allow biological boys who self-identify as girls onto girls’ sports teams or face administrative action from the Education Department.

If this policy were to be broadly adopted in anticipation of the regulations that are no doubt on the way, what would this mean for girls’ and women’s sports? Midleton Gardaí spoke to a driver at Garryvoe beach who had travelled over 20km without a reasonable excuse. After we engaged with the man he agreed to leave & go straight home.

Shortly after we spoke to the same driver at Ardnahinch beach. Fined for breaching Covid regs pic.twitter.com/me9JT835Fg

On #Covid19 travel checks near the border, @EamonRyan tells @TodayWithClaire “If on a road south of the border, 5km from the border, someone’s one that road and doesn’t have a valid explanation as to why they’re travelling, they will be subject to prosecution and fine” pic.twitter.com/BgTD4hneQj If some of the roads in Waterford City are not gritted this morning, well, you might forgive them… pic.twitter.com/CZ5Uj4Rsjh A CATU member in Tallaght is currently dealing with Ray Cooke Lettings‘ inaction on an out-of-control mould situation in an apartment, which is causing serious health problems for the tenants.The situation has been ongoing for the last three years. The letting agent is refusing to carry out inspections due to Covid, despite the fact that Ray Cooke is currently taking bookings for house viewings.

This is my Daughter’s apartment which she pays a fortune for every month only to live in a slum. Disclaimer: no shes not a lone parent no she’s not on social welfare no she doesn’t get HAP. She just a hard working mother.