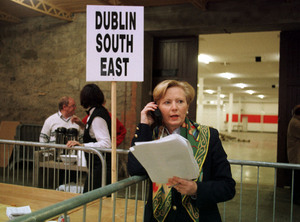 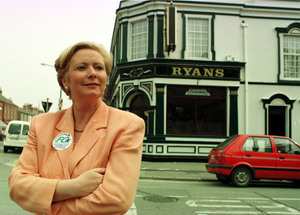 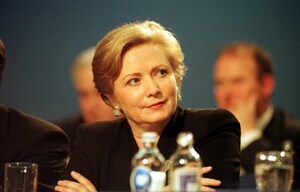 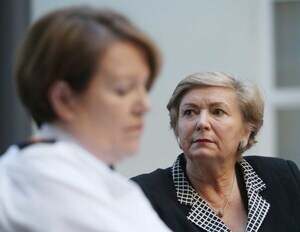 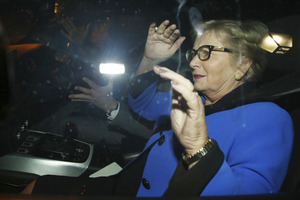 Frances Fitzgerald through the years and (above) a near prang with photogrpahers while leaving government buildings this evening.

“Today I made the decision to tender my resignation to the Taoiseach, stepping-down with immediate effect as Tánaiste and Minister for Business, Enterprise and Innovation. It has been the greatest honour of my life to serve in Government, but I believe it is necessary to take this decision to avoid an unwelcome and potentially destabilising general election at this historically critical time.

Throughout my career I have always sought to act with integrity and responsibility, and that is why I have decided on this occasion to put the national interest ahead of my own personal reputation. I have always believed in fairness and equality and these principles have guided my work as Minister for Children and Youth Affairs, as Minister for Justice and Equality, and now as Minister for Business, Enterprise and Innovation.

I would like to thank the Taoiseach for showing the same courage and determination to protect my good name that he displayed three years ago when he stood-up and defended the reputation of Maurice McCabe. What I admire most about the Taoiseach is that he has always believed in doing what was right – not what was popular or politically expedient. I will always be grateful for his confidence and support and for giving me the opportunity to serve in a Government that is making a real difference in people’s lives at a critical time in our history.

However, I decided that my continuation in office risks destabilising that good work, and so I have decided to step-down so that this work may continue and the country can be spared an unnecessary election. It will also allow me to vindicate my good name at the Charleton Tribunal, without causing any further distraction to the work of the Government. I have always believed in due process and I believe that in the current situation that is becoming increasingly difficult for me. I acted correctly in difficult circumstances and, in fact, did everything that I could to support the search for truth and protect whistleblowers.

I would like to thank all those who have worked with me over the years and I am so grateful for the incredible support I received from family, friends, supporters, staff, and my constituents in Dublin Mid-West. And I look forward to continuing to serve all the people of Dublin Mid-West.

“This morning, Frances Fitzgerald came to me to offer her resignation as Tánaiste and Minister for Business, Enterprise and Innovation. She is doing so to avoid an unnecessary and early General Election that could have left the country without a functioning government and Oireachtas for several months at a crucial time for Ireland.

Over the next few weeks and months, the government will need to focus on the Brexit negotiations, both phase one and phase two. We have a Finance Bill and Appropriations Bill to enact. Legislation to pass for public sector pay restoration and pension and social welfare increases. We also have the important work of the committee on the 8th amendment to complete paving the way for a referendum next year. All of these would fall in the event of a general election.

The work of the government and the parliament must not be interrupted during this important period. So, it is with deep regret that I have accepted her resignation.

It is my strong view that a good woman is leaving office without getting a full and fair hearing.

Frances has been an exemplary member of Government and a loyal colleague. She established the Department of Children and Tusla, changed the constitution twice to enshrine in it children’s rights and the right to marriage equality. She was one of the most reforming Ministers for Justice we have ever had setting up the Independent Policing Authority chaired by Josephine Feehily, the Legal Services Regulatory Authority and bringing in a raft of reforming legislation including the Sexual Offences Act. She always supported whistle-blowers, and enshrined a code of ethics in An Garda Síochána to protect them.

In the past few days a drip-drip of information may have made certain things seem greater than they are. There was a feeding frenzy, and it became impossible for her to get a fair hearing based on the full facts. I hope that will change in the period ahead.

While all of the facts still remain unclear, there are a few things that we do know. Frances had no hand act or part in the former Commissioner’s legal strategy, did not devise or guide it in any way. She was advised by her own officials that she had no function in the matter. The Attorney General has since confirmed this advice and further advised that she would have been acting improperly and inappropriately if she had sought to interfere with the work of the O’Higgins Commission.

We know from the e-mails, that Frances Fitzgerald had no knowledge of it until the Commission’s hearing were already underway and that her knowledge of the detail was limited.

I hope calm, measured reading of the evidence will show that the Tánaiste acted appropriately, and I hope the Charleton Tribunal will establish this conclusively in the weeks ahead, and that she will have her good name vindicated. I expect her to continue to play a full role in political and public life including at the highest level.

Throughout her career, the Tánaiste has been a champion of women’s rights, and equal rights, she has been a pioneer when it comes to supporting children, and fighting against all forms of inequality and injustice.

The events of the past few days have exposed major problems once again within a dysfunctional Department of Justice, including the way important emails were not found and therefore not sent on to the Charleton Tribunal during discovery. I am directing that there will be an external inquiry into that to report before Christmas. Systemic problems within the Department were identified in the Toland Report. Minister Fitzgerald began the process of implementing the Report, and this has continued under her successor Charlie Flanagan. These reforms will now be accelerated, and the government is planning radical action to restore public confidence in the Department of Justice.

An independent and change implementation group will be established to:

a) assess progress in implementing the recommendations of the Toland Report;

b) review the culture of the Department, make recommendations for change, particularly in the light of evidence of a continued siloed and secretive culture and a failure to provide accurate information to me and the Oireachtas;

c) examine in particular, the relationship between the Department and the Gardaí, to ensure that the relationship is appropriately structured, is understood in both organisations and operates in such a way as to ensure accountability and better performance;

d) draw on the expertise of the Policing Authority in conducting its work;

The Government will in the coming days provide further details on this. The Minister and Secretary General of the Department for Justice & Equality will ensure that all future PQs are replied to as fully and openly as possible, subject to Dáil Standing Orders and the law. All recent PQs asked by any Deputy relating to Maurice McCabe will be reviewed and it will be ensured that they have been answered as fully and openly as possible. Any additional relevant additional information will be provided to Deputies as quickly as possible.

These events have reminded us of some of the ways Maurice McCabe was undermined, when he shone a light in some very dark places. As Taoiseach I am determined to shine the brightest of lights into the darkest of places, so that we arrive at the truth and have true accountability.

I continue to believe that the Tánaiste acted throughout in a way that was appropriate. But these are matters that will now be investigated and adjudicated upon by a tribunal.

In the meantime, the Government will continue to work for the good of the country. We will focus on the challenge of Brexit, and deal with the many other problems we are facing. We will not be distracted as we strive to do what is in the best interests of all the people.” 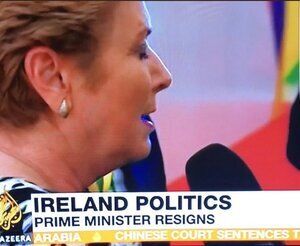 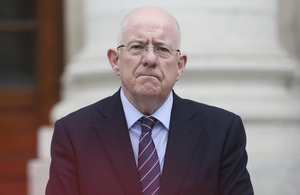 She Fixed The Road