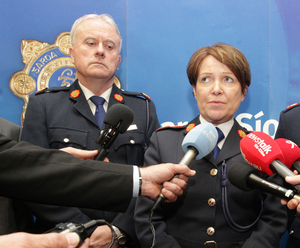 On RTE One’s This Week.

There was an item on Garda Nicky Keogh who has previously alleged that a garda was involved in the distribution of drugs in the Midlands.

RTE’s John Burke reported that the Minister for Justice Charlie Flanagan has indicated to Garda Keogh’s legal team that the matter is for the Garda Commissioner.

He also said he is “open to establishing an inquiry into the case in certain circumstances”.

The letter also stated he’s asked the Acting Garda Commissioner Donal O’Cualain for an update on the matter.

This is despite Mr O’Cualain, and his handling of the original investigation into the collusion claim, being the subject of a complaint to GSOC by Garda Keogh.

Readers will recall the following…

In May 2014, Garda Keogh, a then member of the drugs squad in Athlone, made a formal complaint to the confidential recipient Judge Pat McMahon about a garda in the drugs squad and their alleged involvement in the supply of heroin in Westmeath, Offaly and Longford.

His complaint was investigated by then Assistant Commissioner Donal Ó Cualáin.

In the same month, then Independent TD Luke ‘Ming’ Flanagan told the Dail:

“[Garda Nicky Keogh]’s greatest concern with the drugs operation in November 2009 is that there was a systematic and orchestrated effort by high-ranking Garda officers to induce and coerce citizens, in this case citizens with no previous criminal conviction, to buy drugs from drug dealers, putting them in personal danger, and sell the drugs in turn to undercover gardaí without making any profit, thus boosting crime detection figures concerning arrests, charges and convictions. The result of this operation was that these mostly young citizens of the State, who had no previous drug convictions, now have serious drug convictions.”

In October 2015, Garda Keogh made a complaint to GSOC regarding the manner in which Mr Ó Cualáin was carrying out his investigation

He alleged there appeared to be a cover up.

On October 20, 2015, Mr Ó Cualáin was appointed to the position of Deputy Commissioner.

“An internal investigation into allegations of gardai collusion in heroin dealing in a midlands town has found evidence to substantiate claims made by a police whistleblower in 2014.

The inquiry has also established that a senior garda was warned about fears of corruption in the force by members of the drugs squad in 2009 but took no meaningful action.

The director of public prosecutions (DPP) recently advised Garda Headquarters that there was insufficient evidence to prosecute those implicated, although they now face disciplinary proceedings.

According to security sources, the internal inquiry concluded that one garda was in a relationship with a female heroin dealer in the town, which resulted in him compromising planned searches and raids.

One witness told investigators he was present when this garda alerted local criminals to a planned gardai search the following day, ensuring they had time to dispose of incriminating evidence, including mobile phones. The witness refused to make a statement under caution or agree to testify, however.

The investigation into the collusion claims was established after Nicky Keogh, a member of the drugs squad, used protected disclosure legislation to act as a whistleblower.

…Garda Headquarters has now suspended from duty the garda allegedly linked to heroin dealers, pending a disciplinary process. The force suspended the officer after the Garda Siochana Ombudsman Commission (Gsoc) said it was launching an inquiry.”

“An internal garda investigation is understood to have found evidence to substantiate many of the claims made by Keogh in 2014. The garda inquiry established that a senior officer was warned about fears of corruption in the force by members of the drugs squad in 2009 and appears not to have taken meaningful action. [Noirin] O’Sullivan has not suspended the garda, though he is facing disciplinary proceedings.”

Broadsheet understands no report on this internal investigation has been published to date.

In November of this year, RTE’s John Burke reported how Garda Keogh’s solicitor John Gerard Cullen wrote to the Minister for Justice Charlie Flanagan, seeking an update on the investigation into Garda Keogh’s 2014 claims of collusion between a garda and a drugs gang.

Mr Cullen wanted to know who was overseeing the investigation into the claims; what was its status or outcome; and what was the outcome of other reports previously commissioned by the former Minister for Justice France Fitzgerald.

Readers will recall that, in May 2015, Garda Keogh wrote to Ms Fitzgerald and claimed he was being harassed by other gardai following his protected disclosure.

And, in May 2016, Ms Fitzgerald asked the then Garda Commissioner Noirin O’Sullivan to provide her with an update of the case which was ultimately forwarded to GSOC.

Garda Keogh has not had sight of any of these previous reports.

On yesterday’s This Week, Mr Burke reported how the Minister for Justice Charlie Flanagan has told Garda Keogh’s legal team that he cannot provide it with these reports due to “ongoing investigations and processes”.

And he said the actual investigation into the claims is a matter for the Garda Commissioner.

Mr Burke also reported that, in his letter, Mr Flanagan has said he has asked the Acting Garda Commissioner Donal O’Cualain for an up-to-date report on the matter.

As regards him being “open to establishing an inquiry into the case in certain circumstances”, Mr Burke reported:

“The circumstances are should the ongoing investigations into this matter prove inconclusive when they’re finalised.”

“Firstly, its terms are very vague. Its conditions are non-specific and it, effectively, it seems to be meaningless. First of all, it appears that the matter would trigger any such investigation is the investigation proving inconclusive. Now, of course, many miscarriages of justice have proved very conclusive indeed.

“So that, in itself, is an inadequate reason, why there should be an investigation. It would also appear to pass the responsibility of answering this question to, perhaps, another body.

“It appears to be kicked down indefinitely down the road into the future.

“And, of course, the problem about that undertaking is that it doesn’t cure the delay which is causing ongoing prejudice in terms of lack of transparency about what is happening in the substantive investigation of what documents are being preserved, if any, what emails, what telephone exchanges and so forth.

“So that when one comes to this possibility, and it’s merely a possibility of an investigation sometime in the future, delay may have allowed the evaporation of evidence, that’s grossly prejudice.

“That’s my reaction to the undertaking.”

Changing Of The Guards

8 thoughts on “‘Delay May Have Allowed The Evaporation Of Evidence’”