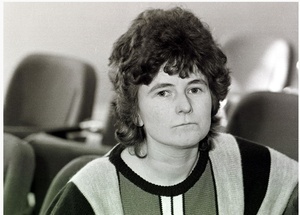 Joanne Hayes at the Kerry Babies Tribunal in 1985

On behalf of An Garda Síochána, I would like to sincerely apologise to Ms Hayes for that, as well as the awful stress and pain she has been put through as a result of the original investigation into this matter, which fell well short of the required standards.”

Baby John’s body was found at White Strand in Cahersiveen, County Kerry on 14 April, 1984 with multiple injuries and had died from stab wounds. The discovery of the body of a second baby on a farm near Abbeydorney outside Tralee, led to a tribunal of inquiry.

Gardaí arrested Joanne on the grounds that she had been pregnant by two different men and gave birth to both babies.