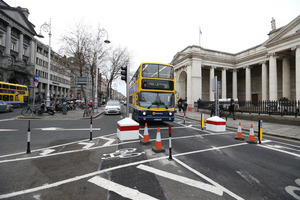 Just last week it was announced that 17 bus routes from north and west Dublin are to be rerouted away from College Green.

These would be the unloved, uncool buses that get most people – especially most working-class and lower-middle-class people – into and out of the city centre.

The Luas is beautiful and the Dart runs along some of the loveliest urban coastline in Europe.

But 61 per cent of all public-transport trips taken into Dublin city centre are by bus. Dublin Bus carried 140 million passengers last year, and about 85 million of them went through College Green.

33 thoughts on “Everyone Stay Cool”