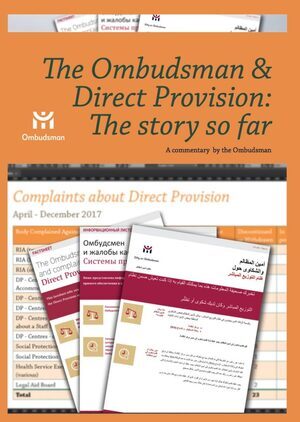 The Ombudsman Peter Tyndall said he has has received 97 complaints from asylum seekers living in Direct Provision since April 3 last year when his office began accepting such complaints.

Ombudsman staff visited DP centres across the country and many of the complaints were “solved on the spot”.

Many of the complaints we get have been about food, both food quality and the way it is prepared or presented. There have also been complaints about the attitude of centre canteen staff, particularly where residents have specific dietary needs or ask for more food, the opening hours of canteens and the lack or absence of self-cooking facilities at many centres.

Direct Provision centres are run on the basis of contracts agreed between the centres and the Reception And Intergration Agency (RIA) which do not require centres to provide childcare facilities, such as crèches or play areas. However, what we have seen is that some centres, either through the involvement of local groups or particularly proactive centre management, do provide crèches and play areas while not being specifically obliged to do so under their contracts.

We have found that some of these complaints can have a cultural or communication dimension. For example, we got a complaint from a resident who was deeply reluctant to ask for more food as doing so would be regarded as begging in her culture.

Centre staff were unaware that the woman was not getting enough food, or of her reasons for not asking for more. We agreed with the centre that, when serving her food, staff would proactively ask her if she wanted more which would mean she would get enough food without her having to face the cultural difficulty of asking for more.

Complaints about staff rudeness or inappropriate communication can often be challenging to seek to resolve. Some have arisen over cultural differences between staff and residents over what is regarded as shouting by one person and normal assertive communication by another.

Other complaints have been about once-off verbal altercations where there were neither witnesses nor contemporary records that would assist with objective examination of
the complaints. Sometimes it can be a case of a centre manager reminding a staff member just to be aware of a resident’s particular cultural background when dealing with them.

My staff have dealt with complaints about refusal of transfer requests for reasons other than centre capacity. RIA has told my staff that its policy is to keep families together and to accommodate people close to education and training opportunities where practicable. We have dealt with a number of complaints where requests for transfers to improve access to medical treatment, to reunite with family, or to avail of education or training opportunities have been refused.

RIA’s position on these cases is that the residents have not demonstrated that there were exceptional circumstances in their situations that would justify a transfer. In a number of cases we have accepted that transfers were not necessary as appropriate medical services or access to training and education opportunities were available locally. In other cases we were satisfied that the residents had made reasonable cases to justify a transfer and got RIA to agree to overturn its initial refusal of their requests.

Many residents have told my staff that they were reluctant to complain about issues at their centres for fearof being singled out as troublemakers or persecuted in some other way for having complained. Similar fears were expressed about complaining to RIA, including a perception that complaining could lead to a person being involuntarily transferred to another centre.
…While my staff did not see any evidence of such persecution, the issue remains a matter of concern for some residents. However, my staff have reported that the frequency of residents expressing this fear of persecution seems to have declined as our programme of visiting all the centres has continued. Perhaps residents are becoming more assured on this point and therefore feel more confident in making complaints.

Following up on our centre visits by issuing a communal response to residents on communal issues is an adaptation we intend to continue. We also intend to undertake a series of follow-up visits to centres, focussing on those at which the greatest number of complaints or issues have come to our attention.
As we will again be a physical presence in the centres, this will allow us to see first-hand what impact implementation of the Supreme Court decision giving asylum seekers the right to work will have on people in Direct Provision.

5 thoughts on “The State Of Direct Provision”