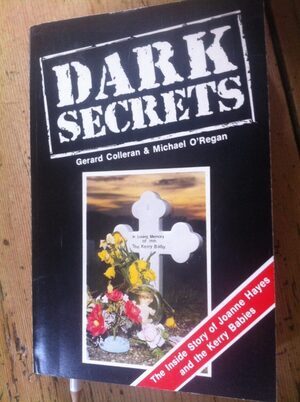 Dark Secrets: The Inside Story of Joanne Hayes and the Kerry Babies‘ (published by The Kerryman, 1985) by Gerard Colleran and Michael O’Regan (edited by Gerard O’Regan).

I started watching a thing called Designated Survivor, I’m still not sure why I persisted beyond the second or third episode, it’s a bit too much like that Scandal thing with Fitz and Olivia.

It could well be that I’m taking some shallow and nasty comfort in Keifer Sutherland not aging as well as say, one of his exes. But I came across a line in it, ridiculous as it is now going to read, but, here goes:

“I believe our Country is only as strong as our journalists. I expect you to keep us honest.“

We were once again introduced to Joanne Hayes, Judge Kevin Lynch, The Kerry Babies tribunal and the Heavy Gang – who instead of being investigated themselves got to sit back while Kevin Lynch promoted Joanne’s anatomy, sex life, and menstrual cycle as more persuasive than evidence crushing the superfeckyougirlundation theory that Gerry O’Carroll still insists on.

Joanne Hayes was mentioned in our mainstream more times in the last month than any member of that Elite Murder Squad. Or even the Justice Minister of the day; Michael Noonan.

Mr Colleran’s first utterance on Sean O’Rourke was “be nice to me.” Before they drove on into the Kerry Babies Case and the Lynch Tribunal; of which Mr Colleran was heard telling the country was “a travesty of Justice from start to end.”

I haven’t read Dark Secrets by the way, well not beyond what was hosted here. But for anyone who has can I ask the question; where in that book does it discuss “elaborate confessions” and “contrived confessions”?

Instead of panning a searchlight over the entire investigation and the Lynch Tribunal to make it visible for the world, they let whom they now liberally refer to as “The Establishment” off the hook.

They allowed the truth to be obscured for profit and professional gain.

I can say that without fear of being taken down or threatened in the way these overly familiar media luvvies do; do you know why? In their own words:

“It was a whitewash from start to finish..”

“failure of the State …”

“we were all complicit in that…”

Here we have two local lads, with Colleran himself now back home with the swagger of a middle child after making good in the big city, lapping it up around the Montrose Radio Centre like they’re the Kingdom’s own Woodward & Bernstein.

Put yourself back into that room in Tralee and imagine sitting where Joanne was sitting; now think about the fact that her story was used for personal and financial gain by two men from Kerry; Ger Colleran & Michael O’Regan.

That is called self-interest; not Journalism. Neither gentleman should ever be a cheerleader for Free Speech and Freedom of the Press since they sold that right all those years ago.

On Broadsheet on the Telly there a few weeks ago, Neil Improv fella’s sister, a grown married woman admitted she never heard of the Kerry Babies until this latest reoxygenation. I’m almost offended by that, but maybe I’m jealous.

I did my leaving cert in 1985 – I can see more clearly now why I just wasn’t in the humour to think beyond the following weekend. For years since I relied on the recession and the probability I was heading off meself anyway for that indifference towards my own future.

I also realised lately that I’ve never really shaken off the institutional abuse and the inequality I grew up to be accustomed to.

But those who are only learning about what it was like, and I am only waking up myself the more I look back and the more I extract from the new bandwagon; there were others. Look into Eileen Flynn and familiarise yourself with the legal term “norms of behaviour.”

Incidentally, it wasn’t just the Church that were sacking female employees for having children, the Gardaí themselves were quick to fire any Ban Garda who had a baby without being married. And all this going on here while we were dancing to Duran Duran, U2, Madonna, A-Ha, A-House, Wham, Feed the World ……… doesn’t seem that long ago now does it?

But thank you Nell. Without you we might still be wondering what really happened, and we may never have known about the deception and betrayal perpetrated between the Gardaí, the Catholic Church (Cura) and St Catherine’s hospital.

You’ve also led to a whole new generation, and indeed future generations only knowing the truth. I am not going to pretend life has been kind to you in recent years, but I promise you – this is your legacy girl. Stand tall.

And from my teenage-self Nell; thank you for enabling me to dispute every official line that came my way about Joanne Hayes, The Kerry Babies and The Lynch Tribunal.

Thank you for helping me know I wasn’t some wild child anarchist reacting for the sake of it.

Thank you for letting me know that crying for Ann Lovett was the decent reaction to have and not fear that it could so easily have been any one of us.

There really were days when I could have begged the Red Cross to come in and save us all; but I knew then Nell, you won’t go down quietly. You had our backs. You were our voice. Thank You. A bit late. But Thank you.

For any Journalist to support a line of thought that is not their own is a fraud. They risk our democracy, and the citizen is their victim.

So there it is, “I believe our country is only as strong as our journalists. I expect you to keep us honest.“

See what happens when I watch too much telly? Blame my teenage crush on Kiefer.

Frilly Keane’s column usually appears here on the first Friday of every month. On this rare occasion, owing to unforeseen circumstances, it appears on the second Friday. Follow Frilly on Twitter: @frillykeane

Previously: Throwing The Book At Them

20 thoughts on “I Expect You To Keep Us Honest”