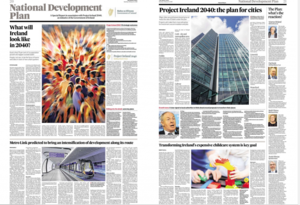 From top: paid for pages in the irish Times; Derek Mooney

In November 1962, in what would become known as the “last press conference”, a tired and agitated Richard Nixon spoke with journalists gathered at his hotel as the results of the Governor of California election became clear. Nixon had lost.

It was his second major political defeat in as many years having narrowly lost the 1960 presidential election to John F Kennedy.

The defeat in his home State was about to end his political career. A political career that already had been mired in controversy and a difficult relationship with the press.

He finished his comments with the following plea:

I believe in reading what my opponents say and I hope that what I have said today will at least make television, radio, the press, first recognize the great responsibility they have to report all the news and, second, recognize that they have a right and a responsibility, if they’re against a candidate, give him the shaft, but also recognize if they give him the shaft, put one lonely reporter on the campaign who will report what the candidate says now and then.

It is the plaintiff cry of almost every politician of the modern era – give me all the stick you want, but please make sure that somewhere, somehow my unfiltered and unmediated comments can get through to the public.

It is not an unfair request.

But the Nixon who pleaded for fairness in 1962 is also the Nixon whose flunkies and henchmen were, seven years later, drawing up “enemies” lists, sanctioning break-ins at the homes and offices of opponents and banning the Washington Post from the White House.

Nixon demonstrated that there can be a slippery slope from asking that your message be fairly heard to deploying all the levers at your command to drown-out all critical analysis.
The slide is by no means inevitable, but it is a risk that even less Nixonian political leaders can face, especially when they close their eyes and ears to the warnings.

Last November the Government’s press secretary was telling journalists that the Government’s new “Strategic Communications Unit” would be staffed by up to five people when it becomes fully operational.

Last week, An Taoiseach informed Micheál Martin and other party leaders en passant during a supplementary reply to a parliamentary question that there are now 15 people working in the unit. Fifteen. Three times the number originally suggested.

When this was put to An Taoiseach and leader of Fine Gael on the day he sought comfort in citing a Fianna Fáil-led government including a budget for strategic communications in the 2007 National Development Plan.

It is also the line that Fine Gael backbencher Noel Rock, a sort of millennial Bernard Durkan, was pushing yesterday as he tried, very non-strategically, to draw attention away from reports that provincial papers were pressured to make government advertorials look like normal news stories.

But that is not what we have here. The Taoiseach’s Strategic Communications Unit is far more preoccupied with campaign marketing than it is with public information. Its communications are anything but two-way. They are decidedly one way and that one way is from the top down – from a beneficent team of FG ministers to grateful public. There is nothing especially modern about that. It is decidedly old fashioned and mid-20th century.

It pushes a very particular image of not just the government as a concept, but of this specific government – and some key players in it – as a unique and marketable brand.

Indeed, one of the many tender contracts that the Strategic Communications Unit have awarded is for branding, the contract for the “Development of Government identity system for roll out across Government Departments” going to the people behind the Irish Water logo, a matter that Broadsheet discussed before.

One presumes this “identity system” is not a form of Public Services Card that every government department is compelled to carry anytime it wants to make a claim or renew its driving licence, but rather a rebranding system that creates a consistent identity for government departments and agencies á la UK model.

If it is just about a government logo, though I thought the 14th century Brian Ború Harp was not just the official State logo, but the government logo too, then it may be something worth exploring.

But the other contracts for “media strategy planning and buying services” and the provision of “marketing pitch specialist services” suggest that the focus is more political. These are phrases more familiar to those preparing party political election campaigns rather than cross government information projects.

But, as we have seen time and again with the Strategic Comms Unit the focus is not on all of Government with all its many departments and agencies.

It is not on all of Government, in the Art 28 constitutional definition of the 7 – 15 members who form the Cabinet.

It is not even on all the Fine Gael ministers who sit in Cabinet.

Rather, it is on a subset of those ministers: a coterie that can be marketed and sold as a fresh, young Government, newly arrived and freshly minted in 2017.

It is a cadre that includes the Taoiseach, Tánaiste and the Ministers for Finance and Environment as regular cast members with the Ministers for Health and Social Protection playing occasional walk-on parts, as required.

As last week’s Dáil exchanges highlighted, the 15-man cheerleading machine… sorry… Strategic Communications Unit is the one big initiative the Taoiseach has taken since assuming office it now dwarves, in terms of staffing and resources, other units in the Taoiseach’s department, notably the social policy division.

Yesterday and today’s revelations regarding the placing of advertorials in provincial papers that were not to be marked as sponsored should make for interesting Dáil exchanges this week.

So will answers to questions on who is getting paid outside to produce all this material and when will the Dáil be shown the plans and progress reports on all these projects, which are all paid for with public money?

Who knows, if the public discussion continues in this vein, maybe we won’t have the Strategic Communications Unit to kick around any more?

11 thoughts on “When Information Becomes Propaganda”