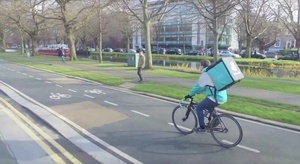 Precarious working is rising, pervading a number sectors: hospitality, retail, construction, financial, education (including childcare) and health. A major difficulty, though, is that there is no official or agreed definition.

There is no one set of measurements that captures precariousness.

We sometimes use short-hand data such as under-employment –people working part-time but looking for more hours or a full-time job. Or those on uncertain working hour contracts. These are aspects of precarious working but do not tell the full story.

To overcome this, the EU Commission’s Precarious Employment in Europe uses the concept of ‘at-risk of precariousness’. They first identify the risks:

Lack of certainty over hours worked

Lack of employment rights such as holiday pay

Lack of right to collective bargaining

This list covers a number of precarious situations based on income, workplace rights, social security, career and health-related issues. The EU Commission then ranks various employment contracts by their potential risk. 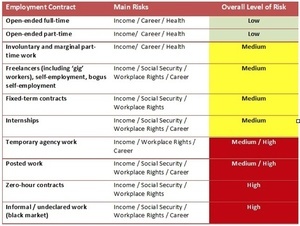 Standard open-ended contracts – whether full-time or part-time – are not without risk of precariousness but they are at the lower end. The highest at-risk contracts are, unsurprisingly, temporary agency work, posted work, zero-hour contracts and black market work.

All work that is ‘atypical’ (that is, not full-time standard contracts) is subject to levels of unacceptable risk. And atypical work is growing. 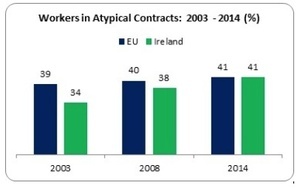 Four in every 10 workers are in medium to high risk categories. Of course, this doesn’t mean that all ‘atypical’ workers are at risk. High-income, professional self-employed and many fixed-term contract workers would not be subject to risk. Nonetheless, if we are to find precariousness, we’ll find it in atypical work.

Obviously no single measurement can encompass all this and provide a bottom line number. We can, though, measure some aspects of precariousness.

Part-Time Involuntary employment: Those who are involuntarily employed part-time (when they would rather be employed full-time or with more hours) stood at 23.7 percent of all part-time workers in 2009. This rose to over 40 percent by 2012 as would be expected during a recession. Since then it has fallen back 31.5 percent but still remains above pre-crash levels.

Temporary Agency Workers: A small category, it has increased during the recession and afterwards. In 2009 only 0.7 percent of workers were employed in this category. By 2016 this has nearly doubled to 1.3 percent with a continuous upward trend.

Temporary or Fixed-Term Contracts: In 2009, 8.8 percent of employees were on fixed-term contracts. This rose to over 10 percent during the recession but has fallen back to 8.2 percent.
These measurements show a mixed-bag. And some high-risk categories are not measurable such as bogus self-employment.

ESRI’s Elish Kelly and Alan Barrett, writing in the Economic and Social Review, studied the trend in atypical contracts and expressed concern at the:

‘ . . . apparent persistence of the increased likelihood of atypical work in the recovery, albeit to a weakening degree. Before drawing any strong conclusions, we should note that the timeframe we are using is short and so we certainly cannot conclude that Ireland is in a new phase where atypical work is more likely. Nevertheless, the results raise the possibility that economic recovery will not, of itself, lead to more full-time and permanent jobs.’

Whether we will fall back to pre-crash norms or enter into a new phase of increasing atypical contracts is still not settled.

If measuring precariousness is difficult, resolving it is even more so and not amenable to a magic bullet.

Each situation requires specific tools and, as the Irish Human Rights and Equality Commission shows, the resolution can be quite complex with potential for perverse consequences (in this case, the Government’s legislation on ‘if-and-when’ contracts and banded hours).

A Floor of Social Rights

So how can we establish a framework that can tackle precariousness while acknowledging the complexity of the different solutions?

A EU Commission study came up with a provocative proposal: a Social Rights Floor. This would take all the social rights currently enjoyed by those on open-ended contracts and assess the degree to which those rights are applicable to those on atypical contracts.

This would include many of the risks outlined above by the EU Commission (social security, workplace rights, etc.).The fight against precariousness shouldn’t be reduced to legislation over employment contracts.

There are two other key ingredients:

Sectoral collective bargaining: each sector has particular issues which could be addressed by employers and employees collectively to ensure the remedy is robust and universally applicable. This not intended to replace a legislative floor but the fact is that banded hours negotiated collectively in the retail sector are more secure than what the Government is proposing. And if one were to look at the legislative protection for atypical workers in Denmark, you might think it quite weak. However, precariousness is tackled through sectoral collective bargaining and the result is much stronger protection.

Fiscal policy: I have written in the past about the idea of transforming personal tax credits into a partial Basic Income or Participation Income. This would only benefit workers whose income is below the income tax threshold. It wouldn’t be a handsome amount at first (approximately €300 per month) but it would establish an income floor that could be raised in the future.

Floors for Social Rights and income will become ever more a necessity in the future. The oncoming automation, AI and robot revolution could generate even more workers on atypical contracts.

The challenge will be to ensure that, regardless of your employment contract, you will enjoy the full range of Social Rights, that you will have an income floor, that you will have access to training and re-skilling (through enhanced labour market interventions) and, so, greater career progression.

In other words, you will be protected from precariousness.