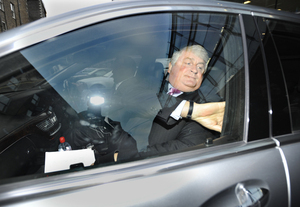 A 2016 research project by Dr Roddy Flynn from Dublin City University found that Media plurality in Ireland was at ‘high risk’. 2016, some 43 years after the problem was first raised by former NUJ President John Devine.

When Mr Devins raised those concerns back in 1973 during Tony O’Reilly’s takeover INM, he was told the NUJ were fighting a losing battle because ‘no politician would pick a fight with someone who prints newspapers.’

Those words weren’t misplaced when it came to the February 2017 vote on a Bill tabled by the Social Democrats attempting to regulate media ownership. Fine Gael voted against the Bill while Fianna Fáil and Labour abstained.

And so it was that the majority of TDs didn’t fancy the fight with anyone who printed newspapers and thus the Bill was defeated. 1973 – 2016…Plus câ change.

Over the course of those 43 years whenever the issue of media control is raised, the main protagonists will shout about how they stay completely removed from any editorial decisions; that they exert zero influence or attempted influence over the editorial line and therefore the issue of who owns the media outlet is inconsequential.

But where is the proof of that?

I certainly can’t find any but there is no shortage of compelling circumstantial evidence to the contrary.

The past 10 or so days have witnessed an escalating story regarding the alleged data breach within INM.

INM titles account for the largest circulation numbers in the print media in Ireland. The Independent’s online news site is one of the most widely accessed on a daily basis in Ireland.

In yesterday’s Sunday Business Post, Gavin O’Reilly, the former Chief Executive of INM (who was ousted by O’Brien in the bitter battle between O’Brien and the O’Reilly family for control of INM) claims that during his tenure at INM he came under ‘sustained pressure’ from Lesley Buckley to remove the investigative reporter Sam Smyth from covering the Moriarty Tribunal.

The Tribunal had been established based on the superb work of Sam Smyth. That Tribunal was investigating the allegation that Denis O’Brien had made corrupt payments to the then Minister for Communications Micheal Lowry to secure the second mobile phone licence.

The Tribunal found unequivocally that Mr O’Brien had paid Mr Lowry and was thus corruptly awarded the mobile phone licence.

So why did the INM Chief Executive come under ‘sustained pressure’ from Buckley, who was an INM Board member at the time, to remove one of the best investigative reporters in the country from covering the Moriarty Tribunal?

Because Mr O’Brien was ‘very upset’ with Smyth apparently.

That doesn’t exactly Indicate a hands off approach to editorial decisions now does it?

When Anne Harris left her position as editor of the Sunday Independent she went public about what she claimed was editorial interference by O’Brien.

In 2014 Gavin Sheridan writing on TheStory.ie noticed a significant change from an early evening print edition of the Sunday Independent and the later evening edition in an editorial piece written by Ms Harris.

“Denis O’Brien is the major shareholder in INM. In theory, with 29pc of the shares, he does not control it. In practice, he does.”

The later edition had not just changed the conclusion, but in doing so had changed the entire meaning of Ms Harris’s piece. It simply read:

“Denis O’Brien is the major shareholder in INM. In theory, with 29pc of the shares, he does not control it.”

Now talk to me again about the supposed hands-off approach to editorial line within media outlets under Mr O’Brien’s control?

It is worth remembering that here is a media owner (aside from being the major shareholder in INM he also owns 100% of Communicorp which operates Newstalk, TodayFM, Spin108, and 98fm among others) who has initiated 12 separate legal cases against journalists or media outlets. Not to mention attempts to use the courts to silence Parliamentarians or PR companies.

Indeed even satire has come into the legal cross-hairs of Mr O’Brien as Waterford Whispers news can testify. So it is that the much mooted ‘chilling effect’ exerted by Mr O’Brien is not just superstition and it ensures his control of the media in Ireland extends far beyond the titles for which he has legal ownership or control.

While there’s no denying that Mr O’Brien is a significant concern in terms of the high-risk to Ireland’s media plurality (and no ‘chilling effect’ can stop me stating that fact) it is undoubtedly time for us to take a serious look at the influence of any owner of significant portions of our media.

As the INM story unfolds we learn that Lesley Buckley, as Chairman of INM, (but bear in mind he is also a long-term associate of O’Brien) initiated the data breach and that the breach was paid for by a company called Blaydon which is beneficially owned by Denis O’Brien.

If you take only one thing away from the convoluted mess that is the INM story as it unravels over the coming weeks, keep an eye to the breadcrumbs that will be laid between the major shareholder, Mr Buckley and the names that emerge from the INM19 and the undoubtedly more to come.

Look closely at whether those names are of people who have been perceived to have somehow crossed O’Brien.

Those connections will undoubtedly be there but the ‘chilling effect’ will most likely mean that journalists will be forced to try paint you a picture wherein you’ll have to try and join the dots yourself or they’ll risk facing a day in court with Ireland’s largest media mogul.

Tears For The Republic