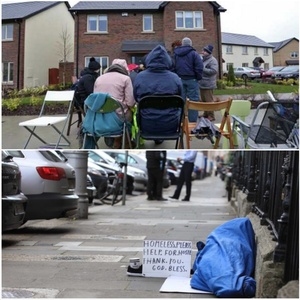 Over the last few days newspapers have led, either above the fold of below the fold depending on your paper of choice, with some variation on the current housing crisis.

Note I said housing crisis and not housing and homelessness crisis.

The sad fact is that homelessness, generally doesn’t connect hugely with many people. The misplaced and (frankly wrong) notion that homelessness only affects a certain ‘type’ is far too common. (The argument of why it still wouldn’t be OK to ignore it even if it was only a certain group is one for another day!)

There are simply no emergency measures being put in place to both arrest and improve what has been a deteriorating situation for at least six years now.

Don’t get me wrong, there is *lots* of talk. And document launches. And relaunches. And millions and billions promised here there and everywhere but actual working solutions and the associated implementation of same? Nada.

Now to calm the Fine Galers who’ll likely burst a vessel telling me about their solution I’m going to tell you right off the bat that your ‘solution’ is crap.

The primary reason that housing hit the headlines this week was because there was a double-figure increase in house prices and scenes reminiscent of the worst times of the Celtic Tiger with people sleeping outside new developments waiting to hand over ever increasing sums to property developers to get onto this wretched thing we refer to as the property ladder.

A ladder that has in the past lured so many to put a tentative foot onto it for fear of being left behind while it gets pulled up. A ladder that for many of those people who managed to get a foot onto it, brought them down, crashing down, rather than up.

It’s not the fault of the people queuing. The societal pressure, the fear, the ‘what-if’ is huge but the repercussions of what we’re allowing to happen, again, are too big and too damaging to ignore, again.

It may be indelicate to mention it to those giddy with a mortgage approval in their pocket and hopes and dreams of a new home in their eye-line but one would be wise to bear in mind that many of the people now living in emergency accommodation, sleeping on families couches or indeed sleeping on the streets, once, not so long ago, slept on the street in an entirely different fashion.

They slept while queuing outside over-priced developments clutching mortgage approvals they could ill-afford or which eventually stretched them to breaking point.

Those sleeping in queues and those sleeping on the streets tonight are both looking longingly at homes they’d like to call their own. It’s worth remembering that the line separating the two situations can be extremely thin.

20 thoughts on “Waiting For A Home”