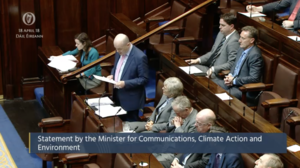 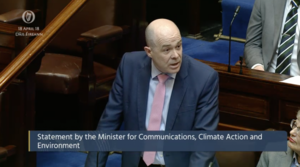 Minister for Communications Denis Naughten gave a statement to the Dáil following a report in The Irish Times this morning.

The report was based an affidavit to the High Court by the Office of the Director of Corporate Enforcement (ODCE) – in which the ODCE has requested that two inspectors investigate certain matters an Independent News and Media.

It stated that, on November 11, 2016, Mr Naughten informed Eoghan Ó Neachtáin, of Heneghan PR which represented INM, that he planned to refer INM’s proposed takeover of Celtic Media Group to the Broadcasting Authority of Ireland (BAI).

This decision wasn’t made public until January 2017.

On December 6, 2017, Mr Naughten was asked questions about the proposed merger by both Social Democrats TD Catherine Murphy and Sinn Féin’s Brian Stanley.

In response to Mr Stanley asking him about the proposed takeover and raising concerns about media plurality, Mr Naughten said:

“I have not made my views known and I am not going to. I have a decision to make and I will make it in line with the legislation.”

To Ms Murphy, Mr Naughten told her he had not yet decided if he was going to refer the proposed takeover to the BAI.

Mr Naughten has confirmed a phone call did take place between him and Mr Ó Neachtáin on either November 10 or 11, 2016.

He said it was a mobile phone call and he took no note of it.

In addition, he didn’t tell his officials.

The Dáil has already heard that Mr Ó Neachtáin didn’t register the approach with the Lobbying Register.

But Mr Naughten has insisted he did not impart any new information to Mr Ó Neachtáin and that he told him he would be following the advice of his officials which he hadn’t received yet.

The minister also said that, during this call, Mr Ó Neachtáin informed the minister that the Competition and Consumer Protection Commission was after approving the proposed takeover by INM.

This decision by the CCPC was reported on November 11, 2016.

Mr Naughten has also told the Dáil he met former INM chairman Leslie Buckley at a DataSec summit in Dublin’s RDS organised by INM – at which Mr Naughten spoke – on May 3, 2017, where they shared “small talk”.

He said he can’t recall fully but he doesn’t believe Mr Buckley raised the matter of the proposed takeover.

It emerged in June 2017 that the acquisition would not be taking place.

Mr Naughten has also told the Dáil: “I didn’t wilfully, or any other way, mislead the Dáil.”

“I wish to confirm that I received a phonecall from Eoghan Ó Neachtáin, former press secretary to a number of governments, on either the 10th or the 11th of November, 2016, informing me that the Competition and Consumer Protection Commission was after approving the Independent News and Media acquisition of the Celtic News and Media Group.

“This was in advance of the Competition and Consumer Protection Commission communicating the decision to me.

“It was common knowledge that this was a very significant acquisition with a significant geographical impact. I expressed a purely personal view that the likely course of action would be a referral to a phase two assessment in accordance with the guidelines in light of the diversity and media plurality assessments required and in light of the scale of the proposed acquisition, its geographical concentration and the extent of the ownership of regional media by Independent News and Media at that point.

“According to the advice from the Office of the Attorney General, in the context of there being a decision by the Competition and Consumer Protection Commission, the legislation about such referrals to the BAI is clear, that referral is an option to me as minister when there is a planned media merger.

” If so, there is nothing wrong or inappropriate with me, as minister, saying to anyone, to the public, anyone or to the public if the plan for a media merger continues, I would take advice on sending it to the BAI.

“This is not inside information, but simply a reflection of the legislation itself.

“I had no inside information to give.

“It may have been preferable if the conversation had not taken place but it was by no means expressing a definitive view nor could I do so at that time.

“Nor did I state that the view expressed was a confidential one as the article (in The Irish Times) seems to assert. In fact, I clearly stated that I had made all pervious decisions, solely based on the advice provided to me by my officials and I reiterated that I would adhere to that approach in this case as well.

“There seems to be a misunderstanding about the nature of the media merger process. This is not a secret process.”

Earlier:  ‘I Take Exception, Yet Again, To Being Misled In This Dáil’

I asked you the question on December 6th 2016 – you misled the #Dail on the Celtic Media Aquisition –@CathMurphyTD pic.twitter.com/pcJrP2DaSK