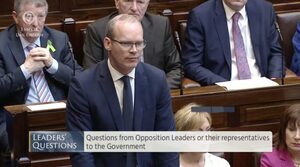 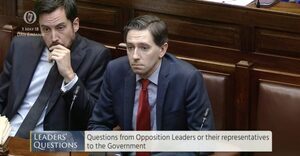 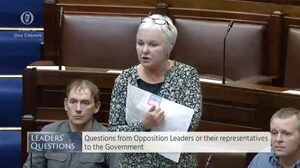 The CervicalCheck smear test scandal was raised again during Leaders’ Questions which were taken by Tánaiste Simon Coveney who told the Dáil that, this morning, he spoke to the husband of one of the 17 women who died.

Solidarity-People Before Profit Brid Smyth held up a diagram showing who is accountable to whom within the HSE and called for “heads to roll”.

Addressing the Minister for Health Simon Harris, she said she knows of a young health worker who was suspended from her job for two months for criticising HSE spending and the trolley crisis on Facebook.

The following are some points which were raised…

“For many woman, their first point of contact to get the information was their GP. If they got an appointment with their GP, they found that CervicalCheck only actually formally contacted GPs this morning – eight days later [since Vicky Phelan’s case in the High Court] and they provided a completely innocuous update which provided no new information to the thousands of GPs around the country who are struggling to deal with this. Again, Tánaiste, I ask, why the delay?”

“…Tánaiste, when will the 38 remaining women who have yet to be informed of their audit be informed. Secondly, will all of these women receive medical supports and full medical supports. I’m aware of at least one of these women whose medical card was withdrawn over the past number of weeks, by HSE medical cards, and who is being put through the ringer to provide information. Yet, she was able to get a phone call recently to tell her about her false positive.”

“…The Taoiseach announced that women can have new smear tests undertaken, that is a welcome development. Will these smear tests be audited in a different laboratory from those that are currently being used to audit smear tests?”

“…Vicky Phelan this morning has called for a scoping inquiry, agreed last evening, to be held in public. Will the Government agree to her call?”

“…I want to ask you about comments made by the Secretary General of the Government this morning in the Public Accounts Committee to deputy Marc MacSharry in relation to sensitive cases. Were the Government alerted some months ago about this case in the context of the sensitive cases update?

“In relation to Tony O’Brien, my understanding from speaking to the health Minister, and I also think it seems to be breaking in the media, he is, he has confirmed to the Health Minister that he will be taking a leave of absence from any involvement outside the HSE between now and when he steps down from the HSE to focus on contributing in a positive manner to the work that needs to be done…”

“I’m not playing politics when I make this point. But we found out yesterday that the State Claims Agency received a request in January for her [Vicky Phelan] files, they then knew in March, the head of the National Screening Programme knew in March that there was a claim going to court.

“Right. I’ll just make it simple for everybody who’s here. That is a diagram of the transitional organisation structure of the HSE. I’ve coloured you in, in blue, to match the colour of your shirt, Minister.

“I know a young worker, a young hospital worker who was suspended for two months because she criticised HSE spending and the trolley crisis on a Facebook post.

“Because somebody has to go here.

“That’s you at the head of the organisation, a fish rots from the head minister and you need to deal with it, or else you need to resign.”