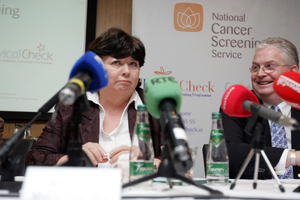 From top: From January 2010, then Minister of Health Mary Harney (left) and then CEO of the National Cancer Screening Service, Tony O’Brien, announcing  plans to establish a national colorectal screening service; Dan Boyle

A secondary issue of concern that seems to have arisen, and has gone on to be sidelined, from the CervicalCheck scandal, has been the extent that the career progression of the HSE’s Tony O’Brien is being facilitated by the government on behalf of the State.

In more progressive jurisdictions legislation exists that insists on cooling off periods (of at least two year’s duration) that should apply to retiring government ministers, senior civil servants, and higher executives of State agencies, before taking up private sector employment in areas that were parallel to their decision making roles.

The prestigious appointments that often follows these public sector departures are usually spun as the head hunting of people of unique ability. Sometimes a nod is made towards the unique experience that these sage public servants hold.

The recent to do surrounding Communications Minister, Denis Naughton, saw very little media analysis of the lobbyist who had compromised the Minister.

As a previous head of the Government Information Service, under two Taoisigh – Brian Cowen and Enda Kenny, Eoin O’Neachtáin had established an access network few could lay claim to.

The most recent Chief Executive of the National Treasury Management agency, John Corrigan, took up a position as Chair of Davy Stockbrokers, eight months after his public sector retirement.

In January 2011, Mary Harney resigned as Minister for Health and Children. By the end of 2012 she had joined the boards of one healthcare start-up and and a multi-national pharmaceutical concern in India.

The acceptance of such positions is not illegal and for the most part should be not be taken as being automatically ethically suspect. However they are compromising. They should not be seen as being seamless or easy.

The indifference towards producing binding legislation on cooling off periods, is now being more contemptuous that post public sector career opportunities should be directly facilitated.

Tony O’Brien seems to have been allowed by An Taoiseach and the Minister for Health, to begin a lucratively paid internship with a US pharmaceutical company, while continuing his role it what is meant to be one of the most important, and absorbing, public sector positions in Ireland.

Aside from bringing in the idea that such an important role can be undertaken on a part time basis, the direct conflict of running a health service which exists to promote lower costing and more generic drugs, with company which exists to bring about an opposite set of circumstances, is surely a tolerance too far.

This is happening because of the political choices being made by An Taoiseach and the Minister for Health. Choices that are taking us very much in the wrong direction on the wrong road in this area of policy.

Given their relative youth, they couldn’t possibly be thinking of their own future career prospects. Could they?