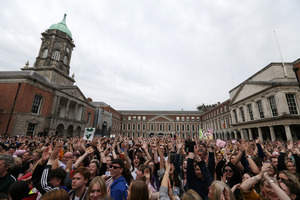 The winds of changed howled across Ireland on Saturday…or did they? People muttered that it smelled like a revolution…but is it really a revolution, silent or otherwise?

I have campaigned on this issue. I have, when possible, joined the throngs of people pounding the streets and knocking on doors during this campaign. I have written pieces, I have filmed videos, I have participated in talk shows and I have had the difficult conversations with friends and family who were uncomfortable with what a YES vote might mean.

I’m tired but I’m exuberant…I’m exuberant that once again we have proven that when people mobilise properly and collectively, change IS possible.

The Together4Yes campaign groups that organically sprung up in every constituency in the country were made up from people of all walks of life; young, old, rich, poor, male, female. They got involved because they wanted to see change just like those who mobilised three years ago for marriage equality.

They got out again because they had seen what was possible and hoped to repeat that success, and thankfully did. But I hope the same scenario does not play out this time round.

Whilst the groups were made up of every demographic there is no denying that younger people once again mobilised in their droves for this referendum.

I’ve long since said that the perception of voter apathy amongst young people is misplaced…give people something that they care about; something that resonates, and they’ll get involved.

Give them a real prospect of effecting change and they’ll beat your door down. The challenge now is making those newly engaged people see that the things they care about; the change they wish to effect, is not limited to rare referendums.

It’s not good enough to spend a month or two doing everything in your power on an issue, to turn up at a ballot box on referendum day but then slink off into obscurity for the next 3 or 4 years or whenever a major social issue raises its head.

How many of us involved in the campaign looked on in disgust as large numbers of the Fianna Fáil party proudly held Vote NO press conferences and photoshoots.

Yet how many of us will mobilise in the same numbers as last Friday come General Election time to ensure that Fianna Fáil’s grip on Ireland is loosened? The things we’re fighting referenda on are the things that were the result of a political system that is controlled by an out of touch political class and the utterly conservative roots of the traditional parties.

Yes there were giants among them during this campaign including Micheál Martin and Simon Harris but a few individuals does not a party make and those who shared our view on this will always have to battle the party view or dilute their approach so as not to alienate the more conservative members.

Instead wouldn’t it make sense to try and avoid the implementation of public policy that we or those behind us will have to rail against in the future? How do you do that, you put the same effort into changing the political system from a politics that is controlled by older males and entrenched in civil war politics and you look at progressive politics. You look at who you feel is representative of you.

The Home2Vote phenomenon in both this referendum and the marriage equality one was amazing but wouldn’t it be fantastic to see that same passion emerge in a way that said ‘we want real change; sustainable change.’ The only way to get sustainable change is to change who runs the system.

Put it this way, if half of Fianna Fáil and a decent chunk of Fine Gael voted NO, it’s not far-fetched to suggest that a couple of years down the line should the wind change and the more conservative elements of either party end up in the driving seat, that you could see legislation overturned and us being dragged backwards on this issue and many others.

But apart from the fears of future direction on social issues such as abortion the most important thing to recognise is the importance of all the other challenges facing Ireland right now.

And while Leo et all were hugely important in this campaign they are still implementing a right-wing agenda that is presiding over an Ireland where almost 800,000 people live in poverty and of that a quarter of a million are children.

They are still presiding over an Ireland where hundreds of thousands languish on hospital waiting lists, and they are ever increasingly moving our housing provision into the private sector while people face exorbitant rents to try and keep a roof above their heads and those who have lost the battle sleep with their children in so-called homelessness hubs.

I quietly celebrated this one victory on Saturday but we do not yet have an Ireland to celebrate and the only way to get there is to vote for change more than once every few years.