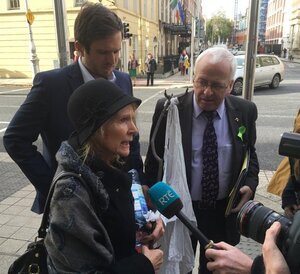 The pro-life group that rallied 30,000 people to pray the Rosary on the coasts of Ireland in the fall is now organizing a public penance in the wake of the abortion referendum.

“Forty Days of Reparation for Life and Faith” will give Irish Catholics the opportunity to “come before God and ask for His mercy and forgiveness” in response to last week’s right-to-life catastrophe.

Rosary on the Coast organizer Kathy Sinnott told LifeSiteNews that the national will to abolish the right to life of the unborn child wasn’t as strong as has been reported.

“I was devastated not just by the loss of protection for the baby before birth but by the size of the vote,” Sinnott told LifeSiteNews.

“[But] as the litany of irregularities in the voting process mounts up, I am no longer am so sure that the election figures are real and the gap as big as it appears.”

Heartened by this suspicion, she is now organizing a spiritual battle against Ireland’s new culture of death.

Fight Them On The Beaches