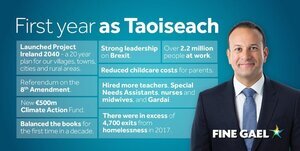 As part of the hoopla to mark Leo Varadkar’s first year as Taoiseach, Fine Gael produced the nifty infographic (top) setting out some of the new leader’s biggest achievements.

The list offers an interesting insight into what the Taoiseach cares most about or, to be more accurate, what the Fine Gael pollsters tell him that his potential voters care most about.

At the other end you find “and gardai” shoehorned into a claim about hiring more nurses and teachers, followed by curiously worded item on housing, though the word itself fails to make an appearance.

To avoid embarrassing Leo by putting a figure on the number of houses and apartments built over the past year, the copywriters had to come up with some phrasing that managed to convey the idea of progress, without breaching the standards in advertising code.

The result is this extraordinarily clunky and impersonal boast that:

“Exits”? If ever a single phrase summed up Orwell’s description of political language “… as giving an appearance of solidity to pure wind”, it is surely this.

It reads as if it came from the pen of someone who writes real estate ads. You know the ones, where “open plan apartment” means the bed is between the cooker and the lavatory and “close to nightlife” means the place is directly over an all-night, bikers’ bar.

No one even vaguely familiar with the presentation of political issues could have signed off on such a phrase. Some alternative wordings must have been considered, such as “families housed”, “homes built” or even the horrid stock civil service phrase “net reductions”.

The fact that these were rejected in favour of “exits” tells you what a tough task some poor Fine Gael wordsmith had trying to script anything even vaguely resembling an achievement on housing or tackling homelessness.

They knew they had to mention the issue somewhere on the list, so there the line sits. Not mentioning it would have caused a bigger outrage. That is the problem with a record like Leo’s, when it comes to housing not only are the statistics bad, they cannot even be trusted not to be worse.

When it comes to the housing crisis there is no end to the bleak statistics. Over 9,500 people are homeless in Ireland today, over 3,500 of whom are children. Rents increased last year by 7.1%.
So why, with this being such a horrendous issue for Fine Gael, is Leo talking up the chances of there being a no confidence motion in his Housing Minister?

Well, because that is what today’s Fine Gael does. Gone are the days of Enda’s obfuscation and microphone dodging, Leo’s Fine Gael is now the party of high theatricality.

Every event, every issue, every announcement is approached as if it was a one-off scene in a theatre or movie production. The focus is not on the narrative or the plot, it is all about the staging and the positioning.

Since the judicious leaking of Leo’s comments at the Fine Gael party meeting, warning of a possible Sinn Féin motion of no confidence in Minister Eoghan Murphy that would see Fianna Fáil take a kicking, the focus has not been on the issue of housing but on the party politics of the issue of housing.

We are talking about housing while not talking about it. It is the perfect Fine Gael production. Lots of high drama, plenty of column inches and dozens of social media posts featuring pictures of Leo and Eoghan, but no content.

Not a single word about policy or actual outputs. At the end of the drama everyone is precisely in the same place as they were at the start. Nothing progresses. It’s lights, cameras and no bloody action.

But through it all, Leo gets what he wants. There is a little less public discussion of the substantial housing and cervical smear controversies. He positions himself as the man above the partisan political fray, not wanting an election but caught between the warring Fianna Fáil and Sinn Féin tribes.

And, in a piece of masterful timing, all of this just after a very well received visit to Northern Ireland and just before welcoming Jean Claude Juncker to Ireland for discussions in advance of the following week’s June EU summit on Brexit.

As political productions go, it was spot on. Well executed, beautifully timed and nicely played, but as with all cinematic and theatrical productions, the appearance should not be confused with reality.

The production crew who brought you last weeks’ no no-confidence motion spectacle also staged last November’s weekend long melodrama turned farce: The Saving of Frances – and that one did not turn out the way they had planned.

The worry is that this is all the FG crew has in store for us over the coming weeks and months, more and more productions and no governing. If so, then the election cannot come soon enough.

Yes, we do have Brexit looming on the horizon and there is an argument that we do not need a month or so of uncertainty at this critical juncture, but there is no major disagreement between the major parties on Brexit and anyway the negotiations are being led on a day to day basis by Barnier and his Brussels team with input from senior Irish officials.

A three-and-a-half week long, high octane campaign that results in a government team that is really prepared to govern, even if getting that government takes a few weeks of horse trading, is far preferable to a year or more of maximum quality, minimum content productions only timed for the next opinion poll.

Derek Mooney: Aras2018 Was Bad, DubMayor2024 Will Be Worse, Much Worse