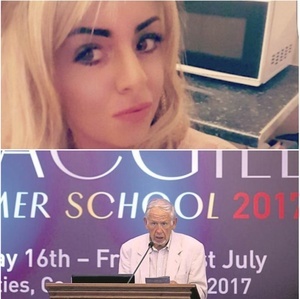 From top: Danielle Carroll, a homeless mother of two boys who died in emergency accommodation in 2017. A summer school named in her honour has been announced as an alternative to the male-dominated MacGIll Summer School organised by Joe Mulholland; Anne Marie McNally

I’ve been asked to speak at two summer schools this year. One with the Humanist and Free Thinkers Society and one with a school that sprung up as a direct result of the controversy surrounding what is arguably Ireland’s most famous summer school – the MacGill – the Danielle Carroll Summer School (so named in memory of a young mother who died in homelessness).

Where MacGill was once famous it is now infamous. You see apparently it can be quite hard to find female participants with the right ‘aptitude’ to speak on political topics, or so declared the long-time organiser of the MacGill school Joe Mulholland.

Admittedly Mr Mulhollan apologised for the aptitude comment but he then proceeded to find other excuses reasons as to why the panels would once again be overwhelmingly male, pale and stale.

I’ve been to MacGill a number of times over the years and one thing that stands out when you attend the sessions is the average age in the hall. It tends to be on the high side.

The panels, for the most part, tend to be dominated by establishment voices, predominately male. Women are there, both in the audience and on the panels but they are very much in the minority.

Yet here is a political event, set in a beautiful part of the world which should be an attractive option for the many young, energised people I meet regularly in politics – many of them female. But it’s not. Mostly they are not invited but when they are they are very much in the minority.

But while we (rightfully) spend a lot of time in this country having conversations about gender, we don’t spend enough time addressing the issue of class.

My upbringing surrounded me with some of the strongest and most resourceful women you could hope to meet; women who had faced every conceivable adversity and yet continued to fight for their families, their homes and their communities.

As a community worker I worked on the front line with these women in facing down the establishment who were used to riding roughshod over such communities.

These women are passionate, principled and empathetic but suggest to them that they would be a great public representative and most will look at you like you’ve 10 heads because it never enters their mind.

Because for them, like it was for me for so many years; politics is something for someone else. It’s for the ‘nice women’ with the fancy clothes and the posh voices and, I’m not going to lie to them; for the most part, that really has been the case.

And where there have been, and are, working class women involved sometimes it feels like they have been required to ham up their background and create almost a novelty factor.

Or deal with the patronising; ‘oh isn’t she marvellous to have pulled herself up by her bootstraps now if only the rest of them would do that…’ guff that makes so many assumptions about how you got where you are.

There are many initiatives underway now to try and get women involved in politics; lots of training sessions and seminars taking place. While I welcome the effort, I generally feel that the effort is not as comprehensive as it could be.

I’ve been invited to participate in such events; they’ve been in venues like the Mansion House, City Hall, Twitter Headquarters and the Morrison Hotel. Lovely venues without doubt but the many fine women I would point to as potential fantastic public reps from the area I grew up in would never dream of rocking up to such an event in a venue like that.

Again it compounds the sense of ‘ah that’s not for me.’ I’ve had these conversations with some women I’ve tried to encourage onto the political field. There’s an initial confidence thing that has to be surmounted and that is simply not going to happen by making these events intimidating by virtue of venue, crowd, or indeed cost.

Meet women where they’re at is what I say. Take these events into community centres and parish halls around the country – specifically focus on marginalised communities (and I include new communities in that).

Make it obvious there is a place for all voices – posh or not – on the Irish political stage, and let’s get a politics that is representative and real.

Maybe then we’ll also get summer schools with panel discussions and RTÉ panels that are more than male, pale and stale with women who’ll sound or dress slightly different than the average South Dublin stereotypical politician.

Standing Up For Equality In All Its Forms

To Reach The Parts Others Won’t Touch

75 thoughts on “Anne Marie McNally: A Place For All Voices, Posh or Not”