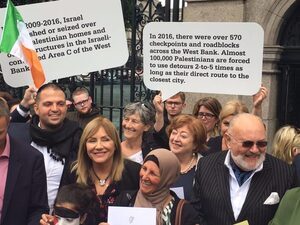 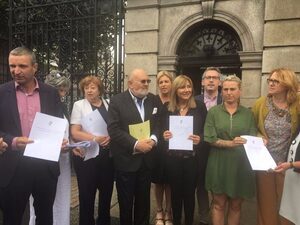 Supporters of Independent Senator Frances Black’s Occupied Territories Bill 2018 – which is due to be voted on in the Seanad at 2.45pm today – gather.

The proposed legislation would prohibit trade with settlements in occupied territories.

The Control of Economic Activity (Occupied Territories) Bill 2018 does not mention Israel and the Palestinian territories but will make it an offence “for a person to import or attempt to import settlement goods”.

The 10-page bill can be read here

14 thoughts on “Meanwhile, Outside Leinster House”