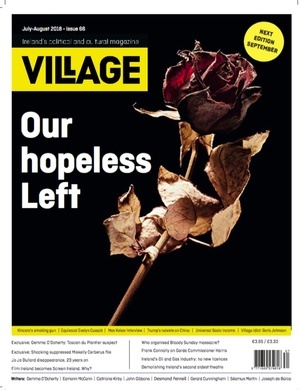 The August issue of Village magazine is out now

Village is unashamedly Leftist. Its agenda is equality of outcome, sustainability and accountability.

These are all driven by the overarching goal of treating people as equals.

The right labours freedom to the detriment of equality, tending to fixate on the provision of choices rather than on how in practice those choices are exercised.

The non-ideological, non-visionary parties of the pragmatic centre hold little appeal for Village.

Depressingly, with a signal in June that it wants to go into coalition with Fianna Fáil or Fine Gael, Sinn Féin has signalled its immediate destination is that pragmatic centre.

For fourteen years Village has tried to champion parties taking egalitarian stances but it’s been difficult.

Our left has been – and let’s be blunt – remains a disaster, a let-down. That is not an accident.

For historical reasons most Irish people, though they have a weakness for leftist rhetoric, are conservative and property-fetishising with a limited sense of the common good.

Many are viscerally hostile to an agenda of treating people equally….

25 thoughts on “A Roast By Any Other Name”