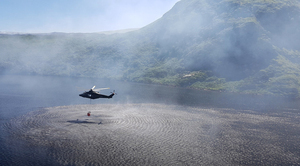 From top: Defence Forces helicopter fighting a fire in the Slieve Bloom Mountains near the Laois-Offaly border during the heatwave; Dan Boyle

I have two tenets of belief that underline my personal political philosophy. The first is that the way that resources (economic, social and environmental) are allocated determines the fairness of a society. The second is how decisions are made, in what way and by whom, is the other vital component of a fair society.

Any political issue, I believe, can be measured against both these tenets.

I’m became a Green because I believed, and still believe, the principles of the party most accorded with those of my own.

Like any member of any political party, I am never 100% in agreement with how the party operates. Over the course of what soon will have been a 30 year journey, I have contested within the party how issues have been prioritised and progressed.

I would have classed myself as a Social (ish) Green dedicating myself to identifying, developing then advocating policy areas not readily identified with the Greens, even if still very much part of a holistic Green vision.

As an elected Green I tried to address not only these issues, but also those issues with a more obvious green bent. Issues like transport, energy, waste management, water use and environmental protection.

While I contributed on all these subjects, I would have deferred to other colleagues to expound more deeply on the Green agenda, while I concentrated on a more conventional political agenda.

I’m still of the belief that that needed to be done. This dual agenda hasn’t benefited The Greens. The social and economic political agendas are of obvious importance, and most particular importance to voters themselves.

Where Greens have fallen down politically, has been in the failure to gain a critical mass among the electorate, that environmental issues should be given precedence.

Without a serious attempt to tackle our environmental difficulties, we will have no means, or wherewithal, to address what it economically or socially unfair.

This is especially true of climate change. Greens have meekly accepted that false narratives should be expressed by those who fear change and who hate science.

What can be argued is the scale, the depth, and the timespan of the problem. What can’t be argued it that the problem exists and is worsening, through political indifference and ineptitude.

In the past nine months Ireland has experienced three extreme weather events of different variety. As I write a heat map of the World shows hundreds of conflagration points.

Reports such as the recent recommendations of the Climate Change Advisory Council, must be acted upon immediately. They must not be placed once again into that vast library of indifference.

We can now longer show tolerance towards the wilfully ignorant. They are no longer part of the problem, they are now the problem itself.

Climate change is the political issue of our time. Life itself depends on how we respond.

87 thoughts on “Dan Boyle: Our Beds Are Burning”