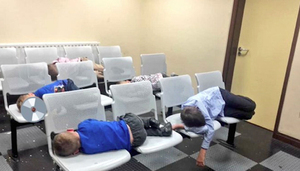 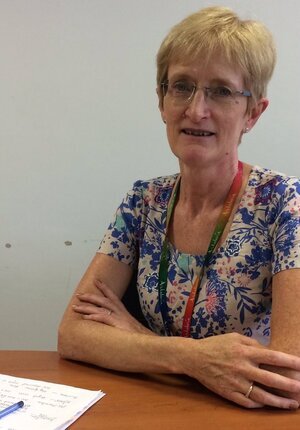 Eileen Gleeson, head of the Dublin Region Homeless Executive, told Claire Byrne, on RTÉ’s News at One, that no homeless person needs to sleep in a Garda station.

Ms Gleeson’s comment follows the circulation of a photograph (above) last night and this morning of children sleeping in Tallaght Garda station (a mother and her six children, aged from one to 11, slept in the station last night).

Of these, the council was able to source accommodation for five of the 10 families, while one family “refused the offer of accommodation, two of the families were linked back into their region and two did not seek further assistance”.

She also said it would be “much better” if homeless families in need of help came forward earlier in the day as opposed to late in the evening.

He said homeless families sleeping Garda stations is the norm.

Ms Gleeson also said that the DRHE has a “contingency plan” in place for the forthcoming visit of Pope Francis and that may include moving homeless people to accommodation outside of Dublin for one night.

Eileen Gleeson: “We’re challenged on a nightly basis and on a daily basis to ensure we provide emergency accommodation for people who are in crisis situations.”

Claire Byrne: “So did you, at the Dublin Region Homeless Executive, know that this family  was going to sleep in Tallaght Garda station last night?”

Byrne: “So how did it happen then?”

Gleeson: “Well, I’m assuming today that they’re one of the families that didn’t seek further assistance from us late last night.”

Byrne: “Are you saying that this family  couldn’t have been accommodated if they had stayed in touch with you?”

Gleeson: “We’re always challenged in relation to finding appropriate accommodation for people and in relation to this particular family, there are large families, so there’s a challenge there as well. But if they had been, kept in touch with us, we would have continued to work with them to find appropriate accommodation for them. We did it for five of the 10 that were in trouble, late in the evening. And the others sorted themselves, one of them actually refused accommodation. So…”

Byrne: “Where did the five go that were stuck late on?”

Byrne: “Can we glean from what you’re saying, that there’s no need for any family to spend a night in a Garda station?”

Gleeson: “Yes. There’s no need. We would work with them, continue to work with them, as long as it takes, to find appropriate accommodation for them. Or to link them back with the area in which they’ve come from.”

Byrne: “But surely you should know?”

Byrne: “Given that you said that one family, I think you said, was it one family or two families refused the accommodation, I assume they’re the contingency beds…”

Byrne: “One family. Why is that? I mean what are those contingency beds like? What sort of places are they, where families would be expected to go?”

Gleeson: “They’re either B&B type of accommodation or they’re buildings where we have beds in them. Sometimes they are communal facilities with showers adjacent to them, where we will put up emergency beds for them, temporary beds. So that we can deal with them, accommodate them over night and process them, assess them the following day.”

Byrne: “So why do you think a family would refuse to go to a contingency bed or sleeping area?”

Gleeson: “There’s no good reason why they would refuse it.”

Byrne: “But there has to be if they’re saying ‘I’m not sleeping there’. I mean what reasons are they giving you?”

Gleeson: “They didn’t feel they would go to the accommodation that was offered. That’s their choice. But they were seeking accommodation, we offered them accommodation and they refused it.”

Byrne: “Are they telling you that it’s not safe?”

Gleeson: “What’s not safe about offering somebody accommodation if the alternative is they sleep on the street?”

Byrne: “I suppose what I’m just trying to figure out is why somebody would say to you: I’ve got no bed, I’ve got nowhere to sleep tonight but I’m not going into that contingency bed that you’re offering me. I’m just wondering what it is that they perceive about that contingency space that’s not for them?”

Gleeson: “Well, maybe you should be asking that of the people who refused it because we would be of the view that any of the contingency accommodation we have meets a standard. It’s perfectly adequate and is adequate to meet the accommodation needs of somebody in an emergency situation.”

Byrne: “What do you say to people who saw that picture today and felt morally outraged by it?”

Gleeson: “Well, we saw the picture ourselves. We’re all morally outraged by it. But it’s not, it’s not the norm, it shouldn’t be the norm, we should never accept it as the norm. But the Dublin Region Homeless Executive is working all of the time to ensure that people are adequately accommodated in emergency situations.

“When they arrive late in the evening, in situations like this, where there’s big families, of course we’re challenged to find accommodation that’s big enough to accommodate them. But we work and will continue to work to do that.”

Byrne: “So it would be helpful if they didn’t arrive late in the evening?”

Gleeson: “Well of course it would be. I mean it would be much better if people came earlier in the evening to us – that we could deal with it in that – but we don’t know what’s happening in people’s lives, we don’t know why they’re in a crisis situation late in the evening. But what we do know is that we have a system in place to deal with them, to flag it and to try and find appropriate accommodation for them….”

Just to clarify Eileen Gleesons comment regarding accommodation being refused last night. Margaret was offered a place late last night in Meath however they could only accommodate 5 of her children. She refused as she obviously wasn’t going to leave 2 children behind! #spin 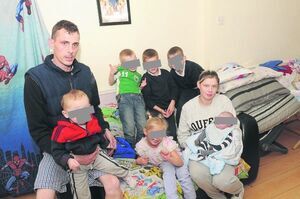 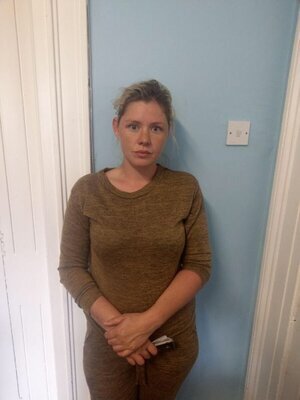 From top: Margaret Cash and her partner John McCarthy and their children in 2015 [pic via Tallaght Echo]; Margaret, who slept in Tallaght Garda station with six of her children, last night.

Thanks Maurice at the Tallaght Echo 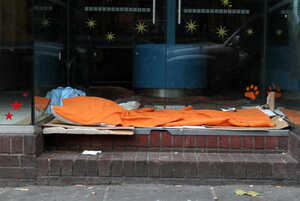 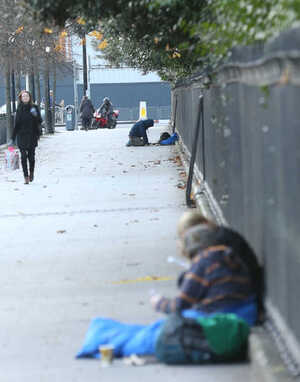 A Family A Day 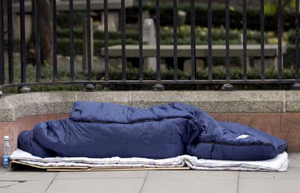 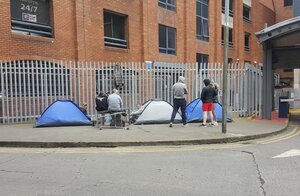