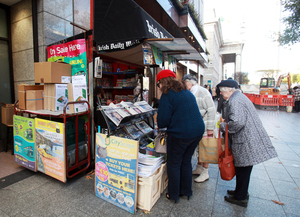 I spend a lot of time researching issues of media ownership/pluralism and the effect of same on our society and democracy. It’s my academic field which luckily enough dovetails into my current career and this weekend I will address the Humanist Association’s annual summer school on the issue.

However I often find that when I raise the issue I am hit with ‘yeah but you should be focusing on the bread and butter issues like health and housing’.

Agreed – but here’s the thing- if you don’t realise or understand the perspective of where the information you are fed on a daily basis regarding these ‘bread and butter’ issues is coming from then you must accept that any discussion of such issues is flawed from the outset.

So focusing attention on who provides and/or controls the information that frames national discussions on the vital topics is not ‘ignoring the bread and butter issues’.

Rather it is seeking to ensure the debate space is available for these vital discussions without particular biases influencing the opinions of those considering the issues.

The current housing crisis and the media treatment of those who dare put their heads above the parapet bear this out.

Similarly with the health crisis; do you honestly believe that a media organisation whose largest shareholder is someone who also has significant financial interests in the private hospital sector is genuinely going to give an impartial view of a healthcare proposal that is designed to make private hospitals effectively redundant?

The facts bear this out. I know I’ve referred to it before on here, but a research project undertaken by Dr. Roddy Flynn in Dublin City University found that stories were treated differently by media organisations depending on the connection of the story to someone in a controlling position within the media outlet.

Basically Dr Flynn examined the treatment of a number of stories and concluded that INM – whose majority shareholder is Denis O’Brien – treated stories regarding Irish Water and the Moriarty Tribunal (both stories with direct impacts on Denis O’Brien) differently to those media organisations which don’t have a connection to Mr O’Brien.

I use the INM and Mr O’Brien research pieces as a good example of the point I’m making – the social narrative surrounding the bread and butter issues you wish to talk about is directly influenced by those who control our media.

Let’s face some real facts here. According to the Media Pluralism monitor Ireland is considered high risk regarding media ownership concentration at 97%.

When it comes to the political independence of our media we score as medium risk at 39% – meaning there is a medium-level problem with the amount of political pressure that is exerted on media outlets.

Compounding this problem is the obvious connections between private media owners/majority shareholders and those in political power.

Does anyone recall how easy it was for a PR executive working for INM to pick up the phone to Minister for Communications Denis Naughten and readily get access to confidential information regarding a proposed media merger which had a direct impact on the value of INM?

How many times do you think that phone call is made the other way around when a Minister wants someone in media power to know they’re not happy with coverage of some issue or other. Fairly regularly I can tell you.

Take a look at how many journalists, even in recent months, have made the switch from journalism – the profession specifically tasked with holding power to account – to working in an advisory role for that very power they set out to supposedly hold to account.

It points clearly to a relationship between politics and the media that has become far too close and far too cosy.

Even within our national broadcaster – free of issues of private ownership – the question of political pressure has always been omnipresent.

The power of the Government to control the licence fee has long been seen as an ever-present threat potentially used to leverage at least some form of control on editorial direction.

But even apart from such a controversial allegation, the fact remains that the media pluralism monitor finds that Ireland is at medium-risk regarding the social inclusivity of our media.

In other words how many working-class voices or minority voices do you find on your airwaves or daily news pages? Not many. And that in itself ensures a slanted version of the coverage of ‘bread and butter’ issues.

So should we be spending our time discussing the pressing issues such as health, housing, cost of living etc.? Of course we should, but should we do it in a bubble of covering our eyes and ignoring one of the key factors influencing the public discourse around these issues?

No, we shouldn’t and to say that we are wasting our time discussing the latter is to succumb to a flawed debating space which will ensure that the bread and butter issues are always going to pitch one socio-economic group or class against another depending on the prevailing interests of those controlling our media at a particular point in time.

Unless we open our eyes and recognise that fact we will continue to shout in an echo-chamber of us versus each other rather than us versus those who seek to control us.