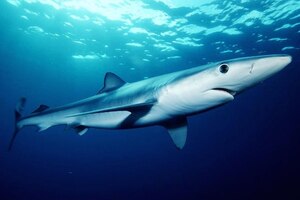 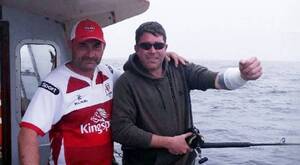 Aran, the Animal Rights Network, have sent a message to shark hunter Robert Malcolmson, who was bitten by a blue shark while fishing off the coast of west Cork last weekend.

“Robert Malcolmson got off lightly and he’s lucky it wasn’t his whole arm that was severed.

While he will recover from his injuries, the lives of countless other living beings who are capable of feeling every bit as much pain are in his hands, but I hope they will no longer be in his sights.

As you reflect on this incident, we ask that you also give some thought to other living beings such as the interesting Blue Shark and smaller fish who feel pain just as you do.

Can you imagine how much they suffer when they curiously go up to your deceitful hook, latch painfully onto it, and sadly can’t let go.

I urge you to reconsider laying down your rod and instead work to protect these creatures who are in so much more trouble than you are at the minute.

If you wouldn’t hook a dog or cat, why do it to a shark.“

Venn Diagram Of The Week

The One That Got (Eaten) Away