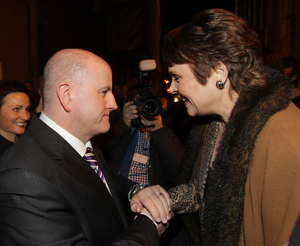 Seán Gallagher is back among us. Once again he is an officially ratified candidate for election to the Irish Presidency.

This, despite the fact, that over the subsequent seven years his only intervention in national debate (during a time of big issue, epoch changing debate) has been to brood that he was done in during the previous presidential election.

He has sustained a myth that he was ambushed during the final presidential television debate, and that this and this alone, was the reason for his ultimate failure.

He seems to believe that it was the nature of accusation against him, which he deemed false, that created the fall off in his support.

It was his bumbling reaction to the accusation that created an impression with many voters that he lacked the gravitas the office requires.

His was a curious campaign then. It was clear his was a particularly soft support, convincing voters to consider him because of what he wasn’t rather than who he was.

Over a ten day period his support increased by 18%, which provided no more clearer a sign of a fickle and indecisive electorate. Gallagher had done little during the campaign to create such a buzz.

There was no defining message he was seeking to impart, no stylised presentation to indicate he might be. He wasn’t a ‘politician’. At the height of what was then anti-politics, this appealed to many.

For most of the campaign Gallagher was to skilfully avoid the reality that he was in fact a crypto Fianna Fáil candidate, knowing that the party was then possessing its greatest level of toxicity.

Support for Michael D. Higgins was also rising, if far less spectacularly, during the 2011 campaign. The increase in his support between the last published opinion poll and polling day was larger than the decrease experienced by Seán Gallagher.

This indicates that even without the TV debate implosion, Higgins would have come close enough to Gallagher after a first count, to be able to eventually pass him out in transfers.

It’s unlikely that Gallagher’s shtick can work a second time. This time it will become harder to convince. There is no element of surprise now. Instead there is a new level of expectation that raises rather than lowers the bar.

Perhaps Mr. Gallagher’s sense of belief is higher than my pessimism about his chances. If he isn’t prepared to accept my arguments then he might be more willing to examine the salutary lesson of Dana/Rosemary Scallon.

Dana was the surprise package of the 1997 election. She won close on 14% of the vote. Her success kindled hope that the religious right may have found its champion, and that possibly a viable political party could be formed in her image.

She parlayed her near success into a term in the European Parliament. From there it was all about diminishing returns. Becoming a general election candidate in 2002, as a sitting MEP, she won under 4% of the vote in Galway West.

Believing herself to still be a viable presidential candidate in 2011 she scored less than 3% of the national vote.

Perhaps the biggest baggage Gallagher may now carry is that having preceded the advent of Trump, the actions of Trump in office have now irredeemably damaged the brand of can do business/politician.

Not even Michael O’Leary could get elected now.