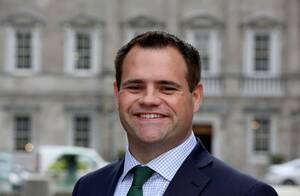 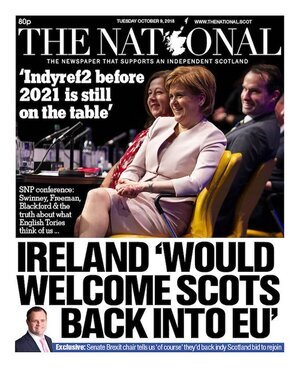 From top: Senator Neale Richmond; This morning’s ‘The National’

It’s not just reliant on the strength of its two big economies of France and Germany, or indeed the UK, we look at small member states and what they bring.

Scotland is very similar to Ireland. You could argue that Ireland has been the most benign influence over the European Union in our 45 year history in it.

And from our point of view [another] small English speaking country with a dynamic workforce, which is very inclusive, very welcoming buys into what Europe is really about.”

We have to make sure a future EU is warm, tolerant, open and welcoming. We don’t want walls going up, we don’t want fences and we don’t want the rhetoric of people like Victor Orban [the Hungarian prime minister] or Marine Le Pen [leader of the Front Nationale in France] – that is really retrograde.

As long as Scotland embraces the European mindset – as it is doing – Scotland would bring so much to Europe.

I believe a border poll would be a disaster, at the moment. One day sure I want to see a united Ireland but I’m not in a hurry for it and I’m not sure if the Republic can afford it economically. I think if we rush it through and did it in a bad way it would lead to civil disobedience.

Northern Irish politics at the moment is quite toxic. It’s not in a good place. I am very worried about [political stability there].

I am worried Brexit has thrown a very divisive wedge at the two communities. The vitriol between hard core loyalists and hard core republicans has increased.”

Go To Work On An Exit